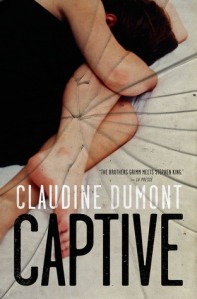 I can finally say that I have a psychological thriller to recommend. I first saw this book when C.J. at ebookclassics reviewed it. The next time I heard of it was when the 2015 Governor General’s Literary Award lists came out.

Emma is miserable. She goes to work, comes home, drinks too much. Then, one night, she is kidnapped. She wakes up in a room with nothing but a mattress, a steel door, grey concrete walls, and a drain in the floor. When she sleeps, someone comes to replenish her water pitcher and to make sure she’s clean. (Imagine knowing that strangers are doing things to you while you’re unconscious? Even if it’s just a bath. But, is it just a bath?)

One morning she wakes up to find that another person has been put in the room with her. Together, they undergo a series of  what feels to them like ‘tests’, as though they are lab rats. But, what is it all for? And, will they ever make it out alive?

Most reviewers on Goodreads are talking about the ending. Some are shocked by it, while others don’t like it, or think it’s too abrupt. But most have something to say about it. I thought it was good, even plausible; definitely not predictable.

The only thing that bothered me about the book was the style of writing. The author uses short, clipped sentences. It works well a lot of the time, giving the narrative a sense of urgency. But, sometimes it got on my nerves. I would never suggest skipping the book because of it, though.

For me, Captive was a page-turner; creepy, suspenseful, and unpredictable. And, for a short book, I was surprised how invested I became in the characters. I hope you know how hard it has been for me not to give anything away. I’d love to talk about it, so get reading!

Even in the impossible, even in the unbearable, there are markers of daily routine.

Claudine Dumont is a writer, teacher, photographer, and co-owner of Ma Soeur et Moi Cafe in Laval, Quebec. Captive is her first novel. The novel was translated from French to English by David Scott Hamilton.

28 thoughts on “Captive by Claudine Dumont”