Do you ever wonder what happens to all the deer and moose that get hit on the highway?

There is a boneyard deep in the woods. The deer and moose could show you where.  They know the place where the trees stop and the carcasses begin.

All the Things We Leave Behind begins with Violet and her brother Bliss stumbling accidentally upon this boneyard when they are young. Violet was initially shaken by it, but it is Bliss who carries it with him.

The boneyard was his first proof of unhappy endings.

Deer carcasses and moose bones are not the only things ‘left behind’ in this book; there are all the antiques left behind by those who die or move away. This is how Violet’s family makes their living – selling antiques out of an old purple barn on the side of the highway near the St. John River in New Brunswick. “The Purple Barn is the St. John River Valley’s ultimate roadside attraction.” Near the “town that drowned” in Riel Nason’s first book.

It’s understandable that an heir would keep something like a piece of jewellery that the former owner wore often, but I think sometimes people are a little too eager with their declarations of sentimental value. Things are things, nothing more, regardless of who owned them, touched them, kept them sitting on a shelf in the background of their life. A cup and saucer owned by your grandmother should be no more important than any other cup and saucer simply because she spent twenty-five cents to buy it on some insignificant trip to Fredericton, and she liked the roses on it better than the green ferns on the only other one in the store that was marked down, and she had just wanted a little something as a pick-me-up since the kids were driving her crazy. A vase of your dead aunt’s that you love she may have hated, and perhaps she kept it only so the neighbour who gave it to her would see it in use. She may be rolling in her grave, thinking of you making it seem as if she had such terrible taste.

Other things we leave behind include our youth, our innocence, and ultimately, often, our loved ones. Bliss spent years dreaming about traveling to all the places whose names were on the licence plates of the tourists who came to the Purple Barn. After his grade 12 graduation, he finally managed to slip away. This summer of 1977, Violet’s parents have gone in search of any sign that might lead them closer to Bliss, while Violet stays home to help with the business.

Through Violet we meet the other characters in the novel; those who also work at The Purple Barn, the mysterious man living in the cabin next door to Violet’s at the campground, Foster the Hermit, and Violet’s friend Jill.  But most of the book’s narrative is concerned with the relationship between Violet and Bliss as they grow up alongside The Purple Barn, and in the shadow of something bigger than both of them. Until the day Bliss disappears, without her.

There are so many incidents that can start out small and don’t seem like anything at the time but end up meaning so much. There are so many tiny twists in a life that you can never know the ultimate significance of.

Other bits I liked:

Anyone looking for a quiet, gentle small-town story that may have you yearning for times gone by (even if you weren’t born until after those times had already gone by) can’t go wrong with either one of Riel Nason’s books. And both have a whiff of the mystical; just enough to have you believing.

Thank you to Goose Lane Editions for sending me a copy of this book for review!

Riel Nason is also a Textile artist. Have a look at her book Modern Selvage Quilting (2016).

You can find a review of both The Town That Drowned and All the Things We Leave Behind at Buried In Print:  “These are quiet novels. The swell of emotion rises slowly, steadily. They pull you under the surface hard and fast.” 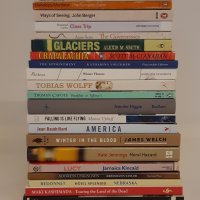