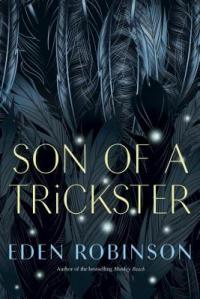 I’m on a roll with these criminal type characters; all of them mostly into drugs. Johnny from We’ll All Be Burnt in Our Beds, Daniel from In the Cage, and now Jared. Jared is different, though, in a significant way – he’s still a teenager, living at home with his mother. Except for the times when his mother’s in a mood and he stays with a friend for a while.

Jared’s had a rough go of it; his maternal grandmother thinks he’s the Trickster and doesn’t like him (“Get, you dirty dog’s arse.”); his mother has a volatile personality (and colourful language); his father left them for another woman and, unbeknownst to his mother, Jared’s been helping him out with his bills using his “cookie” money; he’s been abused by one of his mother’s ex-boyfriends; his mother and her new boyfriend go off for days at a time leaving Jared home alone; he recently lost his beloved pitbull, Baby Killer. And those things don’t even touch what goes on at school and with his peers.

The one constant person he has in his life is his paternal grandmother. They text back and forth whenever he feels the need, and she ensures him he can come live with her whenever he wants. Her unconditional love is his only safe place in an otherwise crazy world.

Jared’s mother loves him too – fiercely at times – and she is very protective of him. (“I’d kill and die for you, Jelly Bean… Don’t ever forget that.“) But her love seems to come with conditions. She expects certain things of him, like complete loyalty and his help with the family “business”. Her number one advice for Jared is “The world is hard. You have to be harder.”

Which is hard for someone with a compassionate personality like Jared’s.

Incredibly, considering Jared’s rocky upbringing, he’s a caring person – he cares about his dad, his step-sister and her new baby; he cares about the boy who is a bit of an outcast because of his nerd-ish temdencies; he cares about his elderly neighbours and their eccentric and lonely granddaughter. In fact, he seems to be the only responsible one around. Where did he get this huge capacity for compassion?

He wished people could make undying declarations of love and loyalty to him when they weren’t half-cut or stoned out of their gourds. Or sorry.

Just when life probably couldn’t get much worse for Jared, he finds himself noticing strange things like talking birds, wandering cavemen, and people with monsters shimmering behind their faces. He thinks he’s losing it and needs to lay off the drugs and booze for a while. But things just keep getting worse.

The bites had healed. He didn’t feel his missing toe anymore. he should be over it by now, he thought, but as he treaded water, he wanted to get drunk, immediately. He wanted to not feel terrified or dumped or used anymore. He wanted to get out of his head and never, ever crawl back in.

At first, I didn’t know how I was going to feel about the magic realism in the book. But Eden Robinson is skilled at combining the real with the supernatural. And humour. Humour might be her secret ingredient. Jared uses humour as defence against his friends, his dysfunctional family, himself, and the mind that he thinks he’s losing. And it all works; so well that I was sorry to see it end and happy to hear there’s more coming.

I think this book is just about perfect and I’d be happy to see it win the Giller.

With all the power of technology and science in the world, I would bet you dollars to doughnuts that you still trust a human face to be a human. But come closer and let me speak to the creatures that swim in your ancient oceans, the old ones that sing to you in your dreams. Encoded memories so frayed you think they’re extinct, but they wait, coiled and unblinking, in your blood and your bones.

Author’s bio: “I was born on the same day as Edgar Allan Poe and Dolly Parton: January 19. I am absolutely certain that this affects my writing in some way.”

Review at Buried in Print: “Given that the mothers aren’t necessarily the Hallmark variety, children are left to fend for themselves sometimes (defend for themselves) too often. Nonetheless, women claim their share of the decision-making (as flawed as it may be). And even though Jared appears to be the main character in this volume, this feels like a woman-soaked story.”

Quill & Quire: “If there was a prize for the best author laugh in CanLit, Eden Robinson’s would be at the top of the list… But don’t get the wrong (sunny) idea. Robinson has earned a reputation for producing dark, sometimes brutally violent, gothic stories. In a 2005 profile that appeared in this magazine, Robinson was credited with writing “some of the most disturbing fiction that Canadian literature has ever seen.””

The Star: “Chances are you won’t read a novel in 2017 with more vomiting in it than Eden Robinson’s Son of a Trickster…”

Interview on The Next Chapter, where Eden Robinson talks about being “tickled” by the idea of having characters from mythology show up in the present.

28 thoughts on “Giller Shortlist: Son of a Trickster by Eden Robinson”