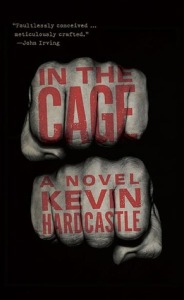 In the Cage is pretty much the opposite of the last book I wrote about. Far from “heartwarming”, it’s rough, gritty (yes, “gritty”), and sad. This is not a criticism – many of you know I like dark, heavy books. However, I wouldn’t normally be drawn to books about fighting or fighters, but I have yet to read a book published by Biblioasis that has disappointed me.

Daniel is a cage fighter whose career is ended by an injury. He moves back to his hometown and falls into the world of crime. He and his wife, Sarah, struggle to keep their heads above water and to provide everything they can for their daughter. (Although, I couldn’t help but notice how much beer they drank as they contemplated their precariuos financial situation.)

Daniel loves his family fiercely. According to an interview with Bibiolasis, Hardcastle believes this is the key to having the desire “to fight tooth and nail even if your odds are almost insurmountable“. Much of what Hardcastle put into his book comes from some personal experience; life in a rural area, a father without a reliable job who fought hard to provide for his family. “You can love your family and do everything in your power to make their lives better, but that doesn’t mean you’ll be able to“.

I found Hardcastle’s writing style distinctive and mesmerizing. He writes about this grim place and these wounded and beaten characters with love, making it not only bearable to read about, but beautiful.

The wind came harder now and the thin drapes blew up against Sarah’s chair and goosepimples rose at her pale neck. She drank slow by the flickering of the television and soon she shut it off. Empty bottle in her hand. The room would not darken. Morning rose up out of the outlying water and through the tree-columns. Birds spoke and half naked-branches shook their leaves.

Afterward Daniel drove home through dark country where the snow had cleared and seed-filled soil lay black and damp. Nightbirds cried out and circled above. And at the end of the road his wife and daughter sleeping.

Not all the scenes in the book, however, are beautiful. There are ugly moments, bloody scenes, and horrific acts. While we witness Daniel untangle himself from the criminal activities he had been involved in as well as experience some joyful times with his friends and family, from another direction we can see the train wreck of his messes and misfortune catching up with him, leading to the story’s heart-stopping conclusion.

I have a soft spot for stories about characters who live in small towns or rural areas; the ones who live on the edge of society, unnoticed by most. People like Johnny in We’ll All Be Burnt in Our Beds Some Night, or the Saint family in Sarah Mian’s book When the Saints. I like to know who they really are.

Something to think about:  Is Daniel’s wife Sarah and their relationship too perfect? This was first brought to my attention by Anne in her review at I’ve Read This. “My only quibble with this book would be the characterization of Daniel’s wife Sarah. She is a strong woman, fearless really, and the amount of shit she puts up with is unbelievable… and although I’m sure men WISH a woman like that existed, I’m not sure I’ll ever meet one“. 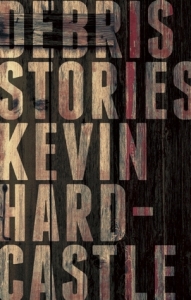 I had noticed all the fuss and accolades surrounding Kevin Hardcastle and his first book Debris, and now I have an idea what it was all about. Debris is now firmly on my to-read list, as well as any other book Hardcastle writes.

Read the praise for In the Cage and Debris by writers such as Craig Davidson, John Irving, and Donald Ray Pollock.

A round-up of reviews for In the Cage.

Thank you to Biblioasis for sending me a copy of this book!

35 thoughts on “In the Cage by Kevin Hardcastle”