I finally decided to pick up one of Angie Abdou’s books this summer. I’ve been meaning to for years now – I wish I could remember what it was that prompted me to do it – it was something I read about her last book, Between. So that’s the one I started with.

I loved it so much, I read The Bone Cage.

I loved The Bone Cage so much I read The Canterbury Trail (which, coincidentally, I had just bought at Ed’s Books in Cape Breton).

Now I’m hugely anticipating her newest, In Case I Go!

Vero Nanton’s life has been hijacked, and she hates herself for being surprised. Every woman she knows told her this would happen – motherhood would change everything – but either she didn’t hear them (because her fevered response to the biological imperative to procreate had drawn all power away from her ears and redeployed it to more biologically useful parts of her body), or she paid these naysayers no heed because, simply, she believed that she and Shane would be different (because they had before, on so many counts, been exactly that – different).

Vero is going downhill fast, and Shane feels at a loss as to how to help her. He suggests getting a nanny, and despite Vero’s reluctance at having her children raised by a nanny, she eventually agrees to it. Most likely coming to the realization that she needs some kind of help after the incident involving too much alcohol, a small dark pantry, and the beginnings of her first children’s book, “The Mommy’s Alphabet”.

A is for asylum/ The place mommy would go to stay/ If she didn’t have her happy juice/ To keep insanity at bay.

C is for the condoms/ Your mommy shoulda thought to use/ They woulda saved her lotsa money/ On her monthly bill for booze.

Much of the story is told through Vero’s perspective. Motherhood has turned out to be harder than she expected, and she carries around a boatload of mother guilt. In addition to that, she worries about her marriage to Shane; they used to be considered, by themselves and everyone else, as the perfect couple. Can she figure out a way pull herself away from the edge and back into her life?

Vero bobs like a drowning swimmer. People talk of a fast descent into insanity as if the psyche only moves in one direction, but Vero dips and whirls; she has a grasp on the situation, and then she doesn’t. She knows the appropriate thing to say, and then she loses it; there’s enough air, and then there’s none.

Vero’s story is good on its own, but what makes this book even better is that we also get the perspective of the nanny, Ligaya. We get to find out who she is, what her life back home was like, what her life is like now as a live-in nanny far from home, and what she thinks of the people she works for.

‘People never change.’ That is the common saying. But the opposite is true. People are ever-changing. Before Vero figures out who they are, before she can finally focus in on their essence, they’ve already become someone else.

Vero and Shane end up trying out a swinger’s resort as an attempt to spice up their marriage:

Nobody in the lobby of Hedonism looks like a hedonist. The men remind Vero of junior high boys at their first school dance – a little too keen, a little too desperate, but working hard not to look it. The women don’t look like themselves either. Vero can tell that much even without knowing them. They all wear expressions they’ve practiced at home in their bathroom mirrors. Vero knows because she wears her own carefully practiced expression. It says: ‘I do this all the time, no big deal, sex and fun, that’s me’. 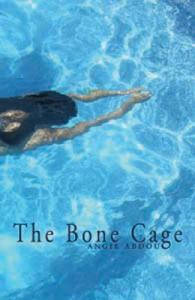 Based on some of the reviews on Goodreads, I didn’t think I was going to like The Bone Cage as much as I did. I loved it almost as much as Between. And, besides that effortless writing style,  it’s completely different.

If asked what reminded her of childhood, Sadie wouldn’t answer baked bread, hopscotch, summer camp. Her childhood was scented with the heavy beached fragrance of a swimming pool. Chlorine’s toxic aroma so deeply soaked into her that it had become her natural perfume. In High School gym class, as soon as she broke a sweat, the pungent aroma of chlorine would swim around her.

The Bone Cage takes a close look at athletes training for the Olympics. Sadie is a 26-year-old swimmer and Digger is a 30-year-old wrestler. Digger and Sadie have a lot in common; both have given their lives to their sport up until now, both have one last chance to make it to the Olympics. And both wonder what or who they will be if they don’t make it. Even if they do, what comes after?

It’s just that, now that I’m getting so close to the finish line, I can’t help but wonder what’s behind it.

The sports psychology in this book fascinated me. The drive and focus they need to get up each morning and train all day, every day, for years and years. They spend a lot of time in their heads, and so do we. We watch them as they mentally prepare themselves for their workouts and races; trying to focus on what they need to do to get better and better, not to become distracted, and not to allow those defeatist, negative thoughts into their heads.

The narrative goes back and forth between the two athletes. They have other things going on in their lives, with their families, that they try not to let interfere with their goals. At times it feels selfish, but what have they been working for all this time if not to win?

You know who you’re going to be if you don’t get a medal, Digger? Nobody.

Sadie and Digger eventually get to know each other, causing them to become slightly distracted from their training. Nervous about this in the lead up to Olympics, they try to remain at arms’ length. The rest I can’t tell you.

I thought the last paragraph was perfect; just the right tone to end on. I think it would be fun to visit these characters 10 or 20 years in the future…

A favourite detail: Does anyone else remember the poster of Canadian Olympic swimmers Alex Baumann and Victor Davis with the “Let’s Get Crackin'” slogan?

The Canterbury Trail was exceptionally different again. In this book there are many characters to follow, and several narrators of the story.

There are the ski bums, the rednecks, the hippies, and the hermit; and none of them like each other.

She hated them and she hated this town. She used to love Coalton, couldn’t believe she’d managed to create a life for herself in a place where playing in the snow took precedence over jobs, financial planning, marriages. Here, when people asked, “So what do you do?” they didn’t mean for a living. They meant, do you ski or snowboard, sled or hike?

It’s April, and unfortunately for them, with the exception of the hermit, they’ve all decided to enjoy one last weekend on the mountain. And they will all be staying at the one cabin available in the area. All of them go from excitedly anticipating their weekend, to trying to force themselves to have fun anyway, to wishing the weekend was over already.  But it’s hard to know which was a bigger threat – nature or each other.

Loco felt his neck muscles pull tense with each profanity. F-Bomb’s swearing had never grated on his nerves like this before, but lately he felt about to explode with annoyance. And it wasn’t just F-Bomb’s swearing; it was SOR’s joking, Shanny’s flirting, everybody’s simplest act of being. And as soon as he interacted with them, even he annoyed himself.

At first I found it hard to keep all the characters straight. But once I stopped trying so hard to do it, it became easier. Also, expect a lot of f-bombs, booze and pot; and whatever you do, don’t expect to like anybody.

The way they used snow as an excuse for drinking might be hilarious if Kevin were married to someone else. But since he happened to be married to her, it made her want to scream the roof off the house, slam doors until the foundation shook.  ‘It’s snowing – celebrate with a drink. / It’s not snowing – drown sorrows in drink. / It might snow – sit by window in anticipation. And drink. / It might not snow – nothing else to do but drink.’

The ending took me by surprise, but I was quite satisfied with it.

Do any of these tempt you? Have you ever read several books by one author all at once before?

36 thoughts on “Angie Abdou: Between, The Canterbury Trail, and The Bone Cage”

Join 2,286 other followers
Follow Consumed by Ink on WordPress.com 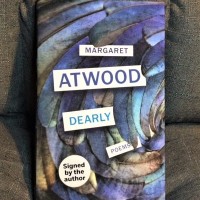