A fable for adults, Rose & Poe is also a re-imagining of The Tempest from the point of view of Caliban (Poe) and his mother (Rose). My thoughts on the book are from someone who has never read The Tempest, and only knows the bare bones of it. I might be missing some cool connections to the play, but this way I can get a sense of what the story is like on its own.

In a small rural village, somewhere in New England, there lived a “monster” of a man with twelve fingers and twelve toes named Poe. He wasn’t very bright, but he was gentle and hard-working.

A fisherman from the city, lingering on a riverbank, hears a strange, wild song in the distance. He shivers, wondering what manner of beast lopes these dark hills. He reels in his bait, packs up his tackle, jogs the half-mile to his pick-up truck, and drives four miles downriver before he dares to cast his bait again. When he does so, it’s with an eye over his shoulder for a creature not of this earth.

Poe had a devoted mother named Rose. She and Poe lived together in a little house on the edge of town and were happy and content with each other.

[Rose]: Poe had his addlements and particularities. That ain’t to say he’s nobody’s fool, only he don’t do no editions nor suttractions, and he can’t read for squat. But he’s a good boy. He does right by his mother, and he does right by other folks. I believe that’s worth more than ciphers.

Poe was infatuated with the sweet, beautiful Miranda.

Thorne watches from the kitchen window. Miranda with her brownies, strolling out to visit Poe. The way the poor devil lights up like a Christmas tree when he sees her. If he were a dog, he’d be wagging his tail.

One day Poe was found carrying Miranda out of the forest, all covered in blood. With no other evidence to go on, the authorities arrested Poe and charged him with assault.

Poe’s trial begins on the fourth day of January, with curiosity seekers packing the Belle Coeur County Courthouse, anticipating an irresistible concoction: beauty and the grotesque, sex and violence, a villain who will be satisfyingly pilloried at the end.

The people of the village wanted justice and someone to blame for the heinous crime.

There is evil afoot in the land and someone must pay, and for reasons none of them could articulate, that someone must be Poe.

Rose and Poe suddenly found themselves outcasts in the community they loved. Hatred and violence threatened to overtake them.

“There he is! That’s Poe! That’s the goddamn rapist mutant who done that girl! Get him! Take the freak down!

In some ways, this book doesn’t feel entirely original; a “gentle giant” who is wrongly accused and a beautiful woman who is attacked and needs to be saved. (It would be cool to switch those two characters around, wouldn’t it?) But, on the other hand, I enjoyed reading it and think it can help remind of us of some of the things we forget at times; acceptance of the “other”, and appreciation of the simple things in life – goats, cheese, small cozy houses, our mothers – all things I love.

If you’re a fan of adult fables or The Tempest you might especially want to give this book a try.

A similar read for me, but possibly more original, was The Douglas Notebooks by Christine Eddie.

Thank you to ECW Press for sending me a copy of this book for review! 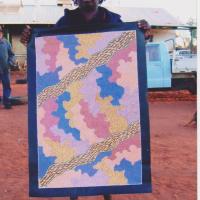