Trucks play a big part in this story of a rural Acadian couple who have been together for almost 20 years. The only thing Réjean seems to love more than his wife, Agathe, is his black Chevy Silverado.

The Silverado was reported sitting next to the highway with the driver-side door open just eight hours after Agathe had kissed Réjean on the front step of their cottage and sent him off fishing in the rain with a Thermos full of coffee, four sandwiches au bologne, and a dozen date squares.

Agathe noticed that Réjean had been acting out of character lately, but she had just thought he was planning a surprise for their 20th anniversary. To Agathe, and to the reader, they appear to have a solid marriage. In fact, they feel so close to each other that they choose to hole up alone in their out-of-the-way cottage, holding onto their French language, despite the fact that they are now living in an English town.

Being separated by language from the world around them strengthened their bond of exclusivity. Gradually, they retreated from the world altogether, existing solely for each other in the confines of their home. “Il n’y a que nous.” (“It’s just us.”)

When you’re that close for that long, what do you do when one half of you disappears?

The story alternates between the past and the present. In the “now” we follow the story of Agathe after the sudden disappearance of her husband; her bewilderment, her hurt, her grief, and finally her need to carry on.

In the “then” we follow the story of Réjean and what happened to him on that fateful day, and the events that led up to it.

Réjean meets Martin at the Chevy dealership where Martin works. Martin sells Réjean’s new trucks to him every year when he goes in for the newest model. Réjean is loyal to Chevy trucks and assumes this is something the two of them have in common. He comes to enjoy going by the dealership from time to time to share a rum and chat with Martin; and, as a shy and awkward man with no friends, Martin looks forward to it. Being his only real friend, Réjean’s disappearance has a profound effect on poor Martin… who secretly drives a Ford.

When riding in the truck together, Agathe always let Réjean listen to his French folk music. It was fine, but she longed for “something loud to release the strap of tension in her jaw”. When Agathe meets Debbie, after the disappearance of Réjean, Debbie introduces her to rock and roll. And Agathe loves it. They play it loudly on their way to work, singing along on the radio. Debbie also teaches her to drive and takes her out to the pubs. Despite her grief, and her longing for Réjean to come back to her, Agathe’s life was opening up.

Rock and roll had a way of putting itself on you, so that you were wearing whatever was being sung. All the abandon and rage and torment and heartache. Everyone here was wearing it. Réjean’s music didn’t do this.

I Am a Truck explores identity, how we define ourselves in relation to others, and how that definition can change when the the ones around us change.

In an interview with Trevor Corkum at 49th Shelf, Michelle Winters says that writing I Am a Truck “sprang from the need to describe the feeling of loving a person who wasn’t there… But then I wanted to make that story exciting and funny, because that’s way more fun than brooding over a bad relationship.”

One of the things I love about the book is the way the characters go back and forth between French and English. (When I was growing up we called it “franglais”.) This way of writing makes the story feel distinctly Acadian or eastern-Canadian. “As a New Brunswicker, the idea of switching back and forth between English and French feels completely natural, and writing a story set in New Brunswick, Chiac felt like a gift I couldn’t pass up.”

When asked in the interview about something she would like asked about her book, Michelle Winters responds by saying “I’d love to be asked about the absurdity of it. I left myself a lot of room in this book to play with the magical or improbable or preposterous; Réjean can be a giant, Martin can be yellow, and Colonel Weed can do whatever he wants, because it’s all allowed in the loose fabric of reality I wanted to create. It’s my favorite way to write and my favorite way to read. I’m intensely grateful when an author I’m reading decides not to confine themselves to absolute tangibles. I love it when anything can happen.” 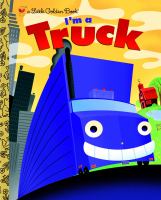 I love that this is the other book that comes up when I search “I Am a Truck” at my library.

Review at Reading Matters: “… it’s highly original, laced with wit and love, and it might just be the strangest, yet most feel-good, story I’ve read all year.”

Review at Buried in Print: “Michelle Winters’ prose style suits the story perfectly. Lean and directed, I Am a Truck reads like a novella, urging completion in a single sitting and revolving around a single incident which sparks into action almost immediately.”

Michelle Winters is also an artist.

28 thoughts on “Giller Shortlist: I Am a Truck by Michelle Winters”