Once I knew Marcie and I were going to go ahead with MARM, I started collecting odds and ends of Margaret Atwood books and stories, including as many of her children’s books I could find through my library.

Up In the Tree, written and illustrated by Margaret Atwood (1978)

The first book for children Margaret Atwood wrote, I think this is my favourite of the lot. It’s simple and engaging with clear illustrations. And what child doesn’t dream of living in a tree?

“When this charming book was first published in 1978, there was a widespread idea that it was too expensive and risky to publish a children’s book in Canada. And so Margaret Atwood not only wrote and illustrated the book, she hand lettered the type! The book was created in the old-fashioned way, using only two colors that mixed together to produce a surprisingly large range of tones and textures.” 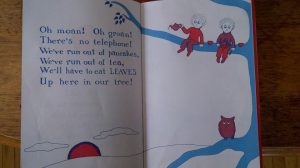 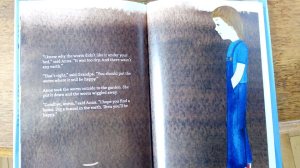 This is the one and only Margaret Atwood I read to my own kids (just because I didn’t know there were more! Goodreads is a wonderful thing.) It’s a little more involved than the others – with short chapters – so might be best for school-aged kids.

“Anna searches for a pet on her grandparent’s farm: will it be a toad? A Worm? A Snake? Each choice she makes teaches her about these creatures and the world they inhabit and, ultimately, about herself.”

Perfect for my crew when they were little, as they wanted all the critters they found in the yard to be their pet. They loved giving slugs pushes on the swing (slugs are good at swinging – they don’t fall off easily!).

If you (or your child) love alliteration, this book is for you.

“When Bob was a baby, he was abandoned in a basket, beside a beauty parlour. His bubbleheaded mum, a brunette, had become a blond in the beauty parlour, and was so blinded by her burnished brilliance that baby Bob was blotted from her brain.”

Bob was living with dogs when he met Dorinda, who lived with her despicable relatives.

“They dressed Dorinda in dust mops and dingy dungarees. They made her doze on a dank and dubious duvet in a derelict dumpster, beside a deep drain full of deadly diseases, such as diphtheria.”

Not to worry about these two, though… together, they triumph in the end.

Another story full of alliteration (in which a younger child would be overwhelmed, I think). Like Bob and Dorinda, poor Wenda is also left parentless at the beginning of the story, and wanders in search of them.

“Wenda was a willowy child with wispy hair and wistful eyes. When she was just a wee one, her wise and watchful parents were whisked away by a weird whirlwind.”

She winds up at Widow Wallop’s Wunderground Washery where she finds other children whose parents have been “whisked away by a weird whirlwind”. But, fear not, Widow Wallop gets her comeuppance in the end.

A Trio of Tolerable Tales, written by M. Atwood, illustrated by Dušan Petricic (2017) 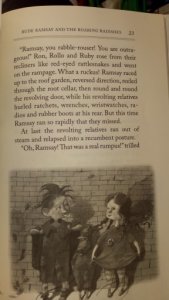 This book contains three stories, two of which are Bashful Bob and Wandering Wenda. The third is Rude Ramsay and the Roaring Radishes. This book is not as bright and colourful as the others. The stories are condensed and found in the general fiction section rather than with the picture books. Many of the illustrations are still there, but they’re in black and white.

Rude Ramsay resides with his “revolting relatives” in a “ramshackle rectangular residence”.

“They roasted rice, raisins, rutabagas, and rhinoceros. They rolled out reptiles with a rolling pin. They refrigerated rhubarb and broiled ribs, raviolis and reindeer rinds on the rotisserie. The rice was rock-hard, the ribs rubbery, the raviolis wrinkled, the rhinoceros raw. The reptiles were still writhing, the rhubarb was runny, and the reindeer rinds were rotten.”

Along with his friend, Ralph the rat, Ramsay goes in search of something edible, but instead ends up finding a friend.

Have you read any of these? Do you know of other well-known authors who have penned books for children? Do the alliterated books make you want to try writing one yourself?!