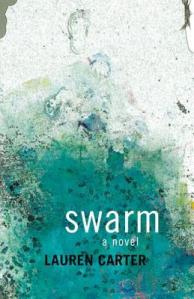 Lauren Carter was completely unknown to me when I saw this title on a list of books at the 49th Shelf, as well as on the Canada Reads 2014 Top 40 list.  It sounded good, so I requested it from the library.  This book exceeded my expectations.  If you liked Margaret Atwood’s MaddAddam Trilogy, or if you like any kind of speculative fiction you will probably like this book.  Besides being a futuristic look at what could happen if the world starts to run out of oil, a clip from the Goodreads synopsis says:

…Swarm is about persevering in a time of shrinking options, and coming to terms with regrettable choices.

Fifteen years ago, Sandy lost her job and met Marvin.  She was desperate to fit in, to belong, and ended up making some bad choices.  The story goes back and forth between the Island, where Sandy, Marvin, and Thomson are now living, and the City from where they fled.  As it goes back and forth, we discover more about what happened 15 years ago, and what brought them to where they are now.

But we were playing.  Like birds of paradise, the male moving in a crazed dance of bright feathers to attract the duller female.  And I fell for it.  By the end of the next day he would have me.  There was a river and I was in it and it was sweeping me along where it would.

I knew I was cornered, but I was convincing myself I could make that corner comfortable: wallpaper it, drag in a comfy chair, feed the fire, have friends over.  Like I still had choices.

Everything in me ached to go back to the beginning.

I thought Sandy was an interesting character. Despite being passive and always apologetic, I liked her.  It was almost refreshing to have a heroine in a dystopian-type novel who is not always tough and rising to the occasion, but instead, one who is floundering and desperate to belong.  She latches on to Marvin, who is only too happy to tell her what to do.  Marvin; tough, angry, aggressive, and selfish.  Thankfully, Sandy also had Thomson on the Island with them.  He becomes more of a father figure to her.  The three of them share so much history, so many secrets, but not enough of a connection.  Sandy longs for a real family.  Then she notices food gone missing, and small footprints in her garden.

I know you, I think.  And I do.  The divots of your footprints in the damp earth, your body’s blur in the cedar trees.  So quick you could be anything.  An animal, an escaped thought.  But what you are, I feel, is mine, and what I want is simple.  For you to come inside.  To wash you in a warm, soapy bath.  Wrap a towel around your skinny frame.  Braid your hair on picture day.  Stand on the side of the road waiting for the yellow school bus.  Play a cartoon on the computer, make popcorn in the microwave, and sit on the couch and laugh.  That perfect life.  The one we once aspired to that won’t ever exist again.

In the end, I think Sandy is able to find some peace and contentment.  The story ends realistically, but also with a sense of hope.

…but wasn’t that how we survived?  By imagining better days, working toward those images in our minds.  …Without hope, you just drowned.

What I really like about this book is the real and close possibility of this future.  It’s not a stretch to wonder what might happen if we start to run out of oil.  What would life be like without computers, cellphones, electric stoves, gas for our cars, jobs, safe neighbourhoods, plentiful food, heat in any form besides fire, and readily available clean water?  How many of us are prepared for a future like that (besides my husband)?  This book shows us what it might be like.

… I knew I wasn’t unique.  All over the country people were abandoning things – walking away from houses they could no longer afford, leaving cars, pale yellow traffic tickets ruffling under the windshield wipers like feathers – whether it was their choice or not.  I was not special; my terror was not unique. Instead, I was simply joining their ranks.

It’s better not to push for the end with violence… In the end are the seeds of the beginning and we want them to be strong and good.

28 thoughts on “Swarm by Lauren Carter” 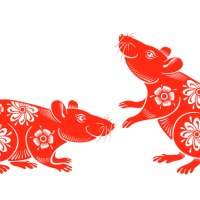