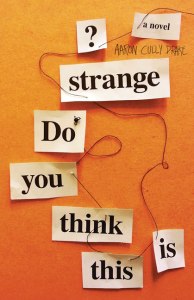 The best thing about Aaron Cully Drake agreeing to an interview, is that I get another chance to tell you to go read this book. Go read it! (My review)

The next best thing is getting to dig deeper into the inspiration behind the book, and into the mind of its author.

Q: What inspired you to write this story about Freddy, and how long has it taken you to write it? What was your writing process like?

A: It didn’t happen that way. The story didn’t appear in an inspirational burst. I just crept between the rafters like rain. The characters sort of meandered along in their own good time. I didn’t know the full plot until I began writing the last third of the book.

I didn’t have a muse, not in the traditional sense. Instead, I had the West Coast Express, which was almost the same thing, because it made me want to write. The commuter train into Vancouver gave me an hour each day of uninterrupted time.  What else is there to do but write? There are no conversations, sitting at a table with three complete strangers (by the time I die, I will have spent tens of thousands of hours sitting quietly beside a complete stranger. Which is stranger: that we think this normal behavior, or that trying to get to know them isn’t normal behaviour?).

I wrote most of this book on a train. All I had to do was get over my paranoia, that people – strangers – were constantly peering over my shoulder at my laptop screen, reading what I’m writing, judging it. But damn them all, I said, and suddenly I was writing 1,500 words a day, every day.

I needed something to write about, and I started practicing writing like Freddy. I had no idea what the plot would be or even who this –still unnamed – guy was.  I just started talking. Writing down his opinions.  At first it was more like a Vonnegut narrative, sort of sweet but blatantly simple. I first pictured Freddy as sort of Peter Sellers, in Being There. I had no reason to do it; I just found that I liked very much writing from that perspective.

At 20,000 words, I decided it was time to see if there was anything of interest. And there was. Some common threads ran through Freddy’s words. Unconnected and disparate, but it was something around which a story might be woven. Best of all, my forced Vonnegut-esque simpleton voice had morphed, and Freddy found his actual voice by then.

The scenes at the hospital was the first thing I wrote. The story first opened with the paramedics bursting through the door of the hospital, although I didn’t even know why he was hurt.

After that, I got distracted and wrote scenes about the gym, and hoped to find a way to connect them. Templeton College made its appearance by the time I was 30,000 words in. I think I discovered Saskia around 40,000 words, and it wasn’t until 50,000 words in that I started to figure out the relationship Freddy had with his parents.

Every time I figured something out, I went back over what I wrote and added new scenes, moving others around.  Always trying to figure out how to wrap it up. I don’t think I knew how it was going to end until 60,000 words, 80% of the way into writing the novel.

The writing of the novel was quick. I think I had a working copy after five months, and then another six months of shuffling the scenes like a deck of cards, trying to find the right arc, the best sequence, constantly rewriting as I went.

Listen: here are the working titles I had, which should be instructive of how long it took me to find the right story:

If you wonder what my process was, I think it was very similar to combing hair with a soft brush. A lot of passes over the threads, untangling them a little bit each time.

I spent a lot of time with serious unanswered questions. How do I connect two big scenes? How do I piece out information about Freddy and his family? How do I sequence the memories of Saskia, the memories of his family, and what’s happening in the present day?

Most of the time, I was stuck.

But, if I was to itemize how I cycled through this process countless times, there’s a definite process I used:

1. Write a minimum chunk of words in one sitting (500 – 1000) Keep all of the chunks in the same document. Don’t worry about whether or not each chunk is connected. Just write them down. Make each chunk a chapter and give it a title that helps you remember what you wrote

2. Do NOT read anything you wrote.

4. Go back over it and see if anything’s worth salvaging, bringing related chunks together.

5. Take the best and decide how it fits into the storyline or, better yet, revises it

6. Now that you have a newer and more developed idea, go back to step 1.

Q: Were you influenced or inspired by any books/authors/people before or during the writing of your book?

A: In no particular order:

My daughter Natalie influenced both of my characters: so many of the mannerisms they have were lifted directly from her. When she grows up and reads this book, I wonder if she will love me or hate me for it.

Kurt Vonnegut was a heavy influence, and I brashly stole from him as best I could. I loved his style of writing, and it struck me that Kurt speaks a lot like I would expect an autistic person to think.

Joseph Heller had a rat-a-tat-tat way of making dialogue that I loved and I tried to use some of his approach with Freddy.

Mark Haddon influenced me, for two reasons. First, his book The Curious Incident, was fantastic in its simplicity, in bringing an autistic character to the front but through the force of his personalitySecond, his book. A Spot of Bother, had some of the finest parent-child dialogue I’ve read in a while. He influenced the tone of the book.

There were also a couple of authors, whom shall remain Voldemorted, and we will only speak of them as They Who Wrote First Person Autistic POV. I read their stories and was certain they had missed the mark completely. I came away with the resounding conclusion that they were less inside the head of an autistic person and more inside the head of a very intelligent chimp.

That motivated me a bit, I think.

Q: Both Freddy and Saskia are on the spectrum. How did you get inside their heads? What kind of research was involved? Are you satisfied with the level of authenticity you achieved?

A: I have no idea, on all counts. I didn’t do any research, other than my own life. But I didn’t know anything about a teenager on the spectrum.

I have no idea how authentic Freddy or Saskia was. I’m not all that concerned about it, to tell the truth. Each kid on the spectrum is their own little snowflake, so why couldn’t two of those snowflakes be Saskia and Freddy?

Yes! I love this analogy.

I expect that some people might not like my character, because of some of the ways I make Freddy a bit of a shit, and some of the ways I make him autistic. The notion of talking threads might bother a few people in the autism community. Or Freddy’s subtle sarcasm, his constant use of similes and metaphors, all of which isn’t expected autistic behavior.

I love everything about Freddy – I think he is imperfectly perfect.
Q: I thought Bill’s character was especially interesting; one minute you like him, the next you don’t. I understood where he was coming from, but at the same time, I wanted to tell him to pull up his socks. His relationship with Freddy was pretty tenuous at times. Why did you decide to give Freddy a wreck of a father, rather than one that was more thoughtful and patient?

A: And where’s the fun in that? This is a story, not a lesson. But here’s the thing: his father is thoughtful and patient. Just not all of the time. Which is why I think his character works so well. Everyone can identify with that failing. Especially parents of autistic kids, because sometimes you’re a super-elite parent, and sometimes you’re a complete dick.

Q: I love the part in the book about Freddy trying to write a poem. I think it says a lot about how his mind works, but it is also a chance for us to see a rare glimpse of his heart. What was it that inspired you to write this part of the book; what are you trying to say? What was your experience in writing the poems? Did it take you as long as Freddy to get it right?

A: It was an exercise in hope and faith. I wrote the scenes with no context for them, no idea where they should go, but they felt so right, that I kept revisiting them.

The big problem was that I had no idea of two things. How was I going to get this into the arc of the story? And, more important, I’d laid down a gauntlet for myself to actually come up with some kind poems that weren’t horrendously contrived.

Those chapters were some of the first written, and I wrote and rewrote them over the next eight months before I decided I could find a place for them in the story.

Q: Do you have any new projects that we can look forward to in the future?

A: Yes. Working on a couple of things. The first is the prequel to Do You Think This Is Strange, and the second is a bit of a left hand literary turn that has been combed and combed and combed until I think I may have at least untangled the last strand of the story.

Looking forward to both! 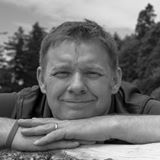 Thanks to Aaron Cully Drake for agreeing to be interviewed for my blog, and for writing such a good book!

16 thoughts on “An Interview with Aaron Cully Drake; author of Do You Think This Is Strange?”