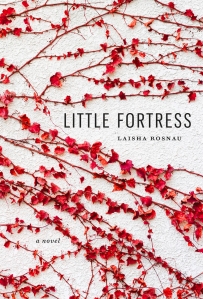 Little Fortress is based on the true story of the Caetanis, a family of Italian nobility that came to the west coast of Canada as a result of the rise of fascism. After the death of the Duke in 1934, his wife Ofelia went into seclusion and took their daughter Sveva with her, until her own death twenty-five years later.

The story is narrated by Miss Jüül, the family’s servant (and companion) for over fifty years. As intriguing as the Caetanis are, Miss Jüül has her own story to tell, her own secrets.

Just as Miss Jüül keeps us close to Ofelia and Sveva, she also takes us away and back. From Copenhagen to Cairo, from a lonely lighthouse to bustling cities, from a palace in Rome to a humble home in the Okanagan Valley of Canada.

I had little idea of what my role would be in this new world, but I had grown accustomed to uncertainty, the spaces between, the ways I could slip into them.

Three very different women – each with their own hopes and dreams for the future – alone together for decades in the same house.

For so long I’d held my body as a little fortress, seams and stitches and the fine bones of corsets holding me in place. Now, I wanted as little between me and the world as possible.

The question that most plagued me as I read this book was: Why did Sveva stay in the house with her mother all those years? What was holding her there?

Her lot had become both of ours. In what ways did we enable her fears to become what kept us together? We were each grown women, after all. You might assume we’d have the agency to make our own decisions. It felt as though the things that bound us were both too subtle and too numerous to see clearly. Like a spider’s web, invisible until we stepped into it.

But it is not the hows and the whys that make this story special – it is getting to hear these women of the past speak for themselves.

Review at the Quill & Quire: “Rosnau has done a masterful job of using the lives of historical figures as the building blocks of a stunning work of fiction. Her source material is identified in the book’s acknowledgements, but it ultimately doesn’t matter how much of the story is true to the historical record and how much is authorial invention. The narrative is utterly spellbinding either way.“ 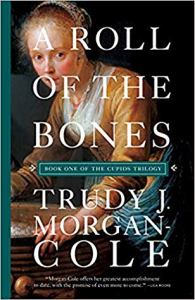 A Roll of the Bones by Trudy J. Morgan-Cole

Like Little Fortress, A Roll of the Bones is based on true events with a lot of imagination thrown in. But  in this case, the events happened 400 years ago – this time in the province of Newfoundland.

In 1610, John Guy established a colony in Cupids, Newfoundland. But what specifically caught the author’s attention was that in 1612, John Guy brought over more supplies, including “ten heifers, two bulls, sixty goats, and sixteen women.” Nothing is known about these women, save for one – a woman who was known to be the wife of a Nicholas Guy. Morgan-Cole was fascinated by these women, and wanted to give them a voice.

“… what is striking to me is that none of the men who recorded the events at Cupids while they were there felt it necessary to keep an accurate record of the number of women in the colony, much less to record their names or tell us anything about their backgrounds.”

Morgan-Cole gives Nicholas Guy’s wife a name – Kathryn – gives her a back story, a family, and a maid called Nancy. She gives these women life and adventure – she sends them across the Atlantic with thirteen other women to join a colony of about 35 men. They are expected to help build the new settlement… and to help grow it. We journey with them as they face long winters, severe illnesses, food shortages, witch hunts, and even pirates. All while trying to maintain dignity, class, and order. (“Safety was, perhaps, a good enough reason for a woman to marry.”)

Everything could be borne, everything survived, if you put your mind to it. If you could not – if you lay down and gave up – well, that was too terrifying to think about.

It doesn’t matter if they are satisfied with their decision to come to the new world – there is no going back.

Shuffle the cards, cast the dice, roll the bones: take a chance.

A note on the climate: “This place is the very devil for making you think winter’s over and spring’s at hand, and then hitting you in the face with another blizzard the very next day. Sure, you cannot count on spring till it’s halfway through summer.”

The best part about this book is that it is only the first of three. I can’t wait to find out what happens to Nancy!

Be sure to visit The Miramichi Reader for another review of A Roll of the Bones, as well as an interview with Trudy J. Morgan-Cole. 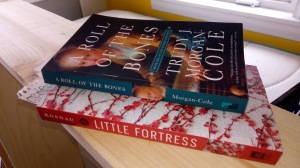 Thank you to Breakwater Books who provided me with a copy of A Roll of the Bones, and to Wolsak & Wynn who provided a copy of Little Fortress. Both are highly recommended!

30 thoughts on “Women’s Voices in Historical Fiction: Little Fortress by Laisha Rosnau and A Roll of the Bones by Trudy J. Morgan-Cole”