A few months ago, I read a book called Black Snow, a love story set during WWI and the Halifax Explosion. At around the same time, I heard about a new book coming out set during the same time and place, The Blue Tattoo. I even listed it in my Hopeful Reading List for 2015, and finally got to it while on vacation in August.

In the meantime, I discovered yet another new book with the same setting, which became our book club’s summer read – Tides of Honour. Our group was looking for an historical romance, and I am always eager to read locally, so we settled on Tides of honour.

Having read all three in a relatively short time, I found it fun and interesting to compare them all. I have also since added to my list of books to read about the Halifax Explosion, so there may be more in the future. I am curious to know how many fictional views/ideas can be created based on this time/place/event, and which versions appeal to me the most. 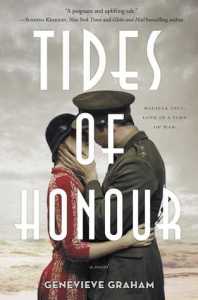 Tides of Honour by Genevieve Graham

Like Black Snow, this book is a love story. For me, the best part about Black Snow was the setting and historical aspect, but because this book has the same setting, I wondered what about it would stand out and make me want to read on?

Black Snow was a fast and furious read, but Tides of Honour is longer and more drawn out. It spends more time on each character and their backgrounds. Danny and Audrey meet in France during the war and begin writing letters back and forth. Then Danny is injured, loses his leg, and is sent home. After that, preparations are made for Audrey to sail to Halifax and marry Danny at his home in East Jeddore.

There is a lot in this book that is predictable; partly because of the genre, but also because I felt like I had read it all before (which I have, so it isn’t really fair for me to compare in this way). At first all is well, and Danny and Audrey are happy and in love. But, then comes the PTSD, the depression, the drinking, and the falling apart of all their hopes and dreams. This has to happen, I know, but this time around it made me feel impatient and wish that Danny would just get over it and move on (so completely not fair, except that I did find Danny whiney at times, going on about how he feels like less of a man because of his missing leg and not being able to provide for his wife the way he would like).

So, then he mends his ways at the last minute and is forgiven and they live happily ever after, right? Not quite yet. The explosion happens, of course, but so do a few other things that I couldn’t have predicted; some of which seemed like a bit of a stretch, but I decided just to go with it. Danny and Audrey are not able to find each other for a few months after the explosion, and they both (mostly) assume the other is dead.

Danny begins working on the re-construction of the city, and gets involved in workers’ rights and the plight of the orphans. Audrey finds herself doted on by a former client of hers whose portraits she had painted before the explosion. She feels well taken care of by this man, and her opportunities are opening up in the art world. But, is she really happy? And, what will happen if Danny and Audrey see each other again?

Besides the romantic storyline, the war, and the explosion, there were other interesting elements to this book; the suffragette movement, unions and workers’ rights, the roles of men and women, the re-building of Halifax, the state of the city and its people after the explosion (many are homeless or jobless), the returning soldiers looking for jobs, and the contrast of all this with the high society Audrey finds herself in since the explosion. The author also asked for permission to use the character from Jon Tattrie’s Black Snow in her book, which was a fun idea.

Bottom line: Worth the read, especially if you like love stories; just keep in mind the predictability of the genre, and the often overly-dramatic (in my opinion) scenes/dialogue. Also, this book might have been better for me if I hadn’t already read Black Snow.

Tides of Honour is Genevieve Graham‘s fourth novel. You can watch the book trailer here.

The Blue Tattoo by Steven Laffoley

By the time I got to The Blue Tattoo I was burning with curiosity about whether it would follow the same pattern of war-love-depression-heartache-explosion-panic-regret as the other two, or be completely different. I was delighted to find that it was very different, and I think I ended up liking this one the best.

There are two big differences I found in this book; the love story was not the main focus of the book, and many different perspectives were given of the events leading up to the explosion and after it. The style reminded me of the way Erik Larson put together his book Dead Wake.

The Blue Tattoo is bookended by Danny Cohen (yes, Danny again – it was a little confusing) looking back on the events surrounding the Halifax Explosion, which adds to the documentary-type feel to the story. His narrative includes his own personal story, as well as many of the other events and people surrounding the explosion.

Elizabeth Beckett is a medical student at Dalhousie University. Her perspective brings in a look at women’s roles and expectations during this time. She is deeply involved in women’s rights and politics, which her parents disapprove of, and also has to deal with inequality at the university. Elizabeth is Danny’s love interest, but by no means does their story take up more than its fair share of space in the book. It was just right. And, just enough to give Danny his reason for coming back home.

Danny has just arrived in Boston when the explosion happens. When he hears of it, and about the train being sent to Halifax to help with the disaster, he talks his way on board and heads back home, desperate to get to his mother and to Elizabeth. Even though we know the train eventually arrives safely in Halifax to the relief of thousands of people, there is a lot of suspense in the trip and the obstacles they face on the way, one of which is the blizzard that hits the night after the explosion.

Other perspectives and historical figures included in the book: the crews of the two ships involved in the collision, the ferryman Charles Duggan who goes to help but ends up being blown all the way to Dartmouth, the soldiers at the armouries getting ready to sail overseas, a few of the families in the area, the men who work at the sugar refinery on the waterfront, Arthur Lismer at the Victoria School of Art (NSCAD) who did some sketches of the explosion, Mrs. Edith Archibald leader of the NS Suffrage Movement, ocularist Dr. George Cox who joins many other doctors and nurses from around Nova Scotia to come help in the hospitals, the process of organizing and identifying the corpses, and of course the much appreciated train from Boston. He even threw in a little bit of history on boxing in Halifax.

This book is Steven Laffoley‘s first novel, and I highly recommend it. I loved the style so much, that I immediately started checking out some of his non-fiction. I’m especially drawn to The Devil in the Deep Blue Sea.

What next? Here’s my list of other Halifax Explosion novels, so far:

Any other suggestions? Has anyone read any of these? Is there a particular topic that has you digging for more these days?

23 thoughts on “Two More Books About the Halifax Explosion: Tides of Honour and The Blue Tattoo”