I’ve been reading The Sixth Extinction this month with Doing Dewey’s Nonfiction Book Club, and it has been fun and fascinating. This is a nonfiction book I can get behind. 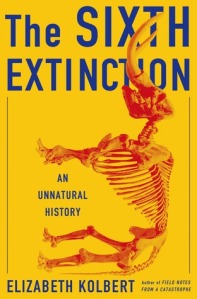 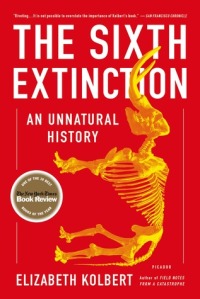 I liked this book so much that sometimes I picked it up instead of my fiction. That’s saying something for me. But, the problem is there is so much good stuff crammed into the book that now I feel at a loss for what to concentrate on. The premise of the book is to outline the ways in which humans are creating the next big extinction event (there have been 5 previously). Visit My Book Strings to read a concise and thoughtful review about how we humans are destroying ourselves. Read the rest of my review to enjoy a long and rambling account of as many things as I could reasonable fit into one post without it taking the rest of my life.

What I loved reading about:

Every chapter focuses on an example of an animal or plant that is either extinct or that is presently being studied or watched as it heads toward extinction. Over the years, I have read about or heard about a lot of living things, but I still found the information presented in this book fascinating. Here’s just a taste:

Over the years, scientists have learned from patterns in the layers of rock and soil, the history of our planet, and the times and significance of the extinctions that have taken place. By looking at the fossils, they can determine some of the species that have made it through, and some that have died out. This is amazing when you think about it. Species that had been doing well for millions of years are suddenly not seen again in the records, which causes us to give some thought to the unpredictability of life on earth.

I love reading about the parade of scientists who helped us get to where we are today. 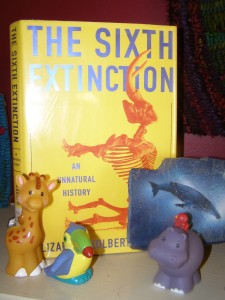 What this book had me asking myself:

There is every reason to believe that if humans had not arrived on the scene, the Neanderthals would be there still, along with the wild horses and the woolly rhinos. With the capacity to represent the world in signs and symbols comes the capacity to change it, which, as it happens, is also the capacity to destroy it. A tiny set of genetic variations divides us from the Neanderthals, but that has made all the difference.

Let’s not give up on this. 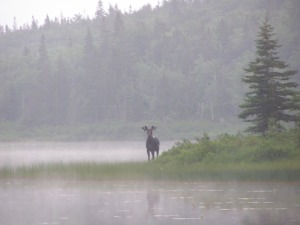 Some other passages that gave me with food for thought:

Everyone (and everything) alive today is descended from an organism that somehow survived the impact. (at the end of the Cretaceous)

It is the rate of CO2 release that makes the current great experiment so geologically unusual, and quite probably unprecedented in earth history.

The reason I’d come to the Great Barrier Reef was to write about the scale of human influence. And yet Schneider and I seemed very, very small in the unbroken dark.

People have to have hope… It’s what keeps us going.

It doesn’t much matter whether people care or don’t care. What matters is that people change the world.

If you want to think about why humans are so dangerous to other species, you can picture a poacher in Africa carrying an AK-47 or a logger in the Amazon gripping an axe, or better still, you can picture yourself, holding a book on your lap. 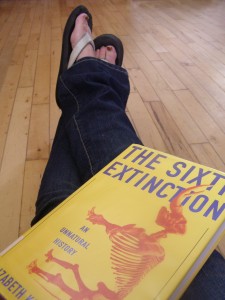 35 thoughts on “The Sixth Extinction: An Unnatural History by Elizabeth Kolbert”