Thinking about having an affair? Just kidding. Interested in stories about marriage and infidelity? Here are a couple of new possibilities you might like. Very different from each other.

The thing that makes Fire Sermon unique is that the couple having the affair are both religious. They feel guilt and shame, not so much because of their spouses, but because of their faith in God. When God comes into it, there’s a whole other entity to worry about, and another perspective in which to view the situation.

I loved the structure of this book (Kirkus Reviews did not, but that just goes to show that we don’t all share the same taste). The story starts off with Maggie and James on their way to Maggie’s hotel to consummate their affair. They have known each other for three years by now, mostly through letters. They have discussed poetry, literature, religion, and their spouses. Their affair goes far beyond physical attraction.

The rest of the story skips around in time and is told through an array of narratives; first person, third person, letters, e-mails, and therapy sessions.

Both Maggie and James have families at home that they love; that they’ve worked over the last 23 years to create. Maggie does not wish to throw it all away, despite the fact that her marriage isn’t filled with the joy it used to be. And she does not want to risk losing her faith in God that has been so important to her. How do you choose to be happy at the risk of losing everything you’ve always believed in? (“God wants your holiness, not your happiness.”) What do you do when you’re filled with longing for a life you can’t have?

My mind is a hell. It replays, on endless loop, a single night in Chicago, then punishes itself for doing so.

No matter which ending I choose, all ends in loss.

Even if you don’t share Maggie’s religious views, her internal thoughts and emotions are compelling.

Thank you to House of Anansi for sending me an ARC of this book!

The Change Room by Karen Connelly (2017)

I read The Change Room over the holidays. I kept seeing it whenever I was at the library, and I finally decided it must want me to read it, so I brought it home. I wasn’t planning to write about this one, so I just read it without any note-taking (which has actually become hard for me to do, so I’m not sure anymore how much of a “treat” it really is). I found it entertaining, thought-provoking, and clever; I couldn’t let it go without a mention.

The best thing about this book, I think, is its discussion value. There is more going on here than just an affair. Eliza and Andrew have a good marriage and are still in love after many years together and two young sons. They both have fulfilling careers, and although Eliza sometimes feels like she does the lion’s share around the house, Andrew is very involved with his sons. In fact, now that he’s older, he admits to sometimes preferring to hang out with them than to have sex with his wife. And here’s the sore spot in their marriage… Andrew is more than a decade older than Eliza, and is no match for her continued interest in sex.

But she’s happy, and knows how fortunate she is to be so. Until she meets Shar in the change room at the local pool. They immediately feel attracted to each other, and Eliza finds herself thinking about her and hoping to run into her again.

This is not a spoiler (it’s very plain on the jacket cover)… Eliza and Shar begin an affair. Eliza feels overwhelmingly guilty when she thinks about Andrew and the boys, but she can’t stop herself from going to Shar’s place.

To add a little more interest to the plot, Shar’s background is in sex work. She’s studying to be a sex therapist, but she pays the bills (still) with sex work. She usually tells her partners about what she does (she’s not ashamed of it), but finds herself hiding it from Eliza. However, she does suggest to Eliza that Andrew might not be totally against her affair if he knew it was with a woman; a woman who is willing to help spice up their marriage (as she has done in her work with other couples).

What will Eliza do? Tell Andrew? End it with Shar? Propose to Andrew that they invite Shar to join them on a date?

You might find the ending comes as a surprise… you might even call it frustrating… but it’s perfect for a book group discussion.

A head’s up… The Change Room can get pretty steamy.

But we’re made of openings. The world comes in.

Have you read any books about marriage and infidelity lately that you’d like to share? Do you like reading about it, or do you avoid it if you can? 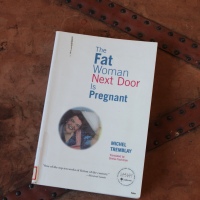