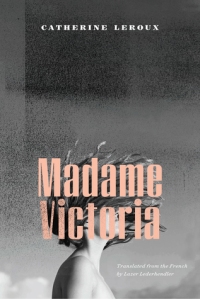 This is the second book by Catherine Leroux I’ve read. The first was The Party Wall, which the Shadow Giller jury (of which I am one) chose as their 2016 winner. In both cases I have found that Leroux’s books are not just well-written stories (although they are that, too)… they are also cleverly imagined and structured.

The Party Wall is a novel of linked stories, set at different times and places, and peppered with small clues as to how they are connected. (My spoiler-free review.) Madame Victoria is also a book of linked stories, this time centered around one character – a dead one.

The stories are not as intertwined as the ones in The Party Wall; instead, they are all attempting to answer the same question: who is Madame Victoria?

Catherine Leroux was inspired to write this book when she heard a news story on the radio about the skeleton of a woman found in the woods near the Royal Victoria Hospital in Montreal. Because no one was able to determine who she was, there is an air of mystery about her.

Each story in Madame Victoria is a portrait of a woman who could have, might have been the unknown woman. Some of the stories feel like real possibilities, while others stray further from what is known about the woman. Still others have a supernatural quality to them – an invisible woman, and a woman from the future. All are beautifully crafted little masterpieces.

By way of these portraits, Leroux explores the possible lives of a dozen women; women with wildly different experiences; a new mother, an alcoholic journalist, a suicidal teen, a runaway Mormon, a Kumari, and a woman with an allergy to other people. In each case, these women struggle to be seen in this world and ultimately end up with an anonymous death.

As you read the stories you may notice small details that Leroux carries through, such as names or character traits, but for the life of me I couldn’t figure out how much significance to attach to those details. Things are not always entirely clear. However, any bewilderment is overpowered by the deep satisfaction of reading Catherine Leroux’s prose. As Amanda Leduc says in her review of the book in Quill & Quire, “… we don’t know what the sum of things might be, but the pieces are so lovingly and carefully arranged it doesn’t matter.”

This reader is eagerly awaiting her next translated book!

Everything starts at the throat. The thirst, the cough, the voice. The words that move mountains, the breaths like punches, the burning that comes with every swallow. All the rest proceeds from that pain: the woody aromas, the texture at once subtle and firm, the dry savours that swim to the core of your being. A tiny world that forges your thoughts, filters colours, sharpens sounds, brings the world into focus.

I believe we didn’t quite know why we wanted to die. At that age, more than at other time of life, you want to love, kill, come, suffer, but you don’t know why. You react to one desire by responding to another; you try to quench your thirst by lighting a fire, to heal a wound by thrusting your finger into it. I believe we wanted to die of love, which was very silly and at the same time surprisingly clear-sighted for adolescents.

Except for her deliveries, she has never spent this much time both awake and horizontal. Nor has the silence around her ever been so perfect. The noise of the engines and the horns rising from the street is nothing compared to the fleshy thrum that set the tempo of her former life and nurtured the feeling that at any moment someone might show up, tug at her arm and demand of her a thousand things meant to remedy the inexorable fact that whatever you fill will eventually be empty again, whatever you heal will end up hurting again, whatever you satisfy will sooner or later be unappeased.

He came from another place, from a house as yellow as a Sunday morning egg yolk, as warm as the smell of roasted chicken.

… if she disappears without anyone even noticing, will she have lived?

The Foreword Review: “Absorbing and often poignant, Madame Victoria is an achievement, both as a mystery about the missing identity of one woman and in its portrayal of women’s lives more broadly.”

Quill & Quire: “… Leroux plumbs the intricacies of what it means to be female, invisible, and forgotten in the modern world.”

“The end result is a novel that packs a star’s density of rage and love into its pages, a delicate and unflinching look at the impossibilities of womanhood that is nothing short of incandescent. A testament to the power of fable and myth, Madame Victoria is a triumphant feat of storytelling.”

Thank you to Biblioasis for sending me a copy of this book! 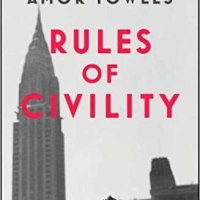 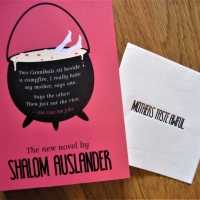