We All Will Be Received by Leslie Vryenhoek

After loving Vryenhoek’s first novel, I was looking forward to this one – and, once again (as I suspected), I was wholly enthralled by the lives of her characters.

Disappearing would be as simple as sliding off the edge, as stretching one leg forward and following it over. Dropping from sight.

Taking place from the late 70s to the mid-2010s, We All Will Be Received tells the story of a woman who sheds her skin in the Canadian prairies and, by a series of chance rides, ends up in small town Newfoundland — as good a place to disappear as any.

It feels most times like it could actually be the middle of nowhere, but folks there swear it’s still the centre of the universe.

With the help of strangers, “Dawn” builds a new life, one that culminates in a rural roadside motel in the middle of a snowstorm, almost 40 years after she first arrives. Other characters, whom we have been introduced to in earlier chapters have come together in this perfect storm of time and place. There’s Ethan (with such a great introduction in chapter two) who is trying to escape his story of childhood trauma; Spencer who is on the road to redemption after his time in prison, but has been distracted by something he saw on the internet; and Cheryl who has a volatile relationship with her teenage daughter: “But sarcasm? Christ. If even a smart, sharp remark is abusive, then every damn thing Cheryl has said to her daughter, going back at least ten years, has been assault.”

Hey Mom, did you ever notice it looks like Newfoundland is giving Canada the finger?

And then there’s Jerry, who has been behind the scenes in Dawn’s life since he brought her to Newfoundland in his truck all those years ago.

“We All Will Be Received reveals the difficulty of finding redemption when the tightening web of an interconnected world has made the past inescapable.” Will Dawn be able to continue living her peaceful life, or will her past catch up to her?

… you don’t have full control of what you say anyway. A message isn’t just what a person sends out – it’s what another person receives.

In addition to excellent characterization, there is a good sense of time and place in Vryenhoek’s novel — the truck drivers in 1977 chat about Pierre Trudeau, the “new”Star Wars movie, and the metric system: “See, they’re changing all the signs now to that metric system. Every time you pass one, you gotta try to remember the last one, wonder are they telling me to speed up or telling me to slow down?“. Leslie Vryenhoek is good at involving all our senses, whether it be a motel carpet that smells like “wet boots and gas station toilets” or the first sight of ocean and how it “keeps on rolling forever”.

Other reviews can be found at: The Miramichi Reader, The Telegram, and Paul Butler’s website. 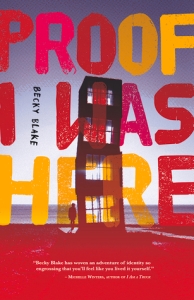 Proof I Was Here by Becky Blake

Proof I Was Here was a lovely surprise for me. I’d never read anything by Becky Blake before, and hadn’t heard much about this book. When I read that it was about a young woman who was visiting Barcelona I worried that I wouldn’t feel a connection with the story, but I was captivated and touched by Niki’s experiences.

Like Dawn in We All Will Be Received, Niki wants to disappear – maybe not forever, but for a while. She has moved to Barcelona to be with Peter, but Peter has changed his mind about their arrangement and Niki is devastated. She leaves with nothing but her coat and wanders the city; the city she had, such a short time ago, been so excited to be part of.

Soon, she’s a part of it in a way she hadn’t expected.

On her website, Becky Blake explains how this novel came to be, and ends by saying: “Proof I Was Here takes place on the streets of Barcelona and includes many of the things that intrigued me most about the city as I got to know it: the pick-pockets, the graffiti artists, the squatters, the Catalan separatists. Told through the eyes of a Canadian woman who is recovering from a loss by apprenticing as a thief, Proof I Was Here is about two Barcelonas: the beautiful tourist destination, and the less photogenic reality underneath.”

I was fascinated by the ‘underground’ world of Barcelona and how, at times, it rubs up against the touristy parts. When Niki meets Manu, she decides to stick with him – she’s drawn to his quiet, non-judgmental nature. But she soon learns the difference between Manu and herself – she has the freedom to leave the streets, while Manu and his group of eclectic friends do not.

I shared her curiosity about people; she wondered about them – what their stories were, how they got where they are now. Manu and his street friends had sobering stories to tell.

For a while, Niki joins the squatters, who call themselves “freegans” (“It just means we try to live without money. Dumpster diving for food and other things we need.“), before, finally, she gets involved with a group of graffiti artists.

The city seemed to have layers that became saturated with detail once I noticed them. First, it had been street people, filling the corners like swept-up piles of trampled flowers. Then half-open purses and bags had appeared, their most valuable contents rising to the top like cream. Treasure in the garbage had popped up next, and now, as I walked back to the squat […], the neighbourhood was overflowing with graffiti: colourful tags and stencilled images, quotes and slogans, declarations of love. The styles of different artists wove through the streets leaving trails I could follow.

And does Niki continue to follow those trails on the streets of Barcelona? Or will she go back to Peter? Maybe home to Canada where she has some unfinished business? Or, with her new street skills, go somewhere else entirely?

Living on the street, there was no real way to keep things, no way to mark them as yours. You just had to enjoy them while they were there. At dusk, before leaving the courtyard, I wove the stem of the rose through the wooden slats of a park bench and left it behind. Manu had bought me a rose. I no longer had any proof, but that didn’t mean it hadn’t been a very lovely thing.

A good line: “The cut on my cheek was throbbing like there was something behind it trying to escape.”

Other reviews can be found at: Quill & Quire and The Star.

What books have you read about ‘disappearing’ women?

18 thoughts on “Women Who Disappear: We All Will Be Received by Leslie Vryenhoek and Proof I Was Here by Becky Blake”