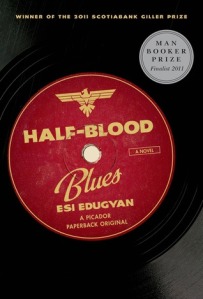 Half-Blood Blues tells the story of a group of jazz musicians, called the Hot-time Swingers, and their time on the jazz scene in Berlin and Paris in the late 1930s.  While in Paris, the young up-and-coming trumpet star, Hieronymus Falk, gets taken by the Nazis and is presumed dead.  50 years later, Sid relives the events that take place up until that moment.  Through Sid’s voice, we experience the fear of the times, the complexity of love and friendships, and the energy and thrill of the music.

Sid Griffiths and Chip Jones have been friends since they were boys back in Baltimore.  Chip was the one who introduced Sid to jazz and he’s been hooked ever since.

I was in love.  Pure and simple.  This place, with its stink of sweat and medicine and perfume; these folks, all gussied up, never mind the weather- this, this was life to me.  Forget Sunday School and girls in white frocks.  Forget stealing from corner stores.  This was it, these dames swaying their hips in shimmering dresses, these chaps drinking gutbucket hooch.  The gorgeous speakeasy slang.  I’d found what my life was meant for.

The Hot-Time Swingers were hot in pre-war Berlin, but as the war drew closer, jazz music in Germany was banned and the streets of Berlin were dangerous.

Jazz.  Here in Germany it became something worse than a virus.  We was all of us damn fleas, us Negroes and Jews and low-life hoodlums, set on playing that vulgar racket, seducing sweet blond kids into corruption and sex.  It wasn’t a music, it wasn’t a fad.  It was a plague sent out by the dread black hordes, engineered by the Jews.  Us Negroes, see, we was only half to blame – we just can’t help it.  Savages just got a natural feel for filthy rhythms, no self-control to speak of.  But the Jews, brother, now they cooked up this jungle music on purpose.  All part of their master plan to weaken Aryan youth, corrupt its janes, dilute its bloodlines.

Sid, Chip, and Hiero made it to Paris, where they met, and played with, Louis Armstrong.

Hiero thrown out note after shimmering note, like sunshine sliding all over the surface of a lake, and Armstrong was the water, all depth and thought, not one wasted note.  Hiero, he just reaching out, seeking the shore; Armstrong stood there calling across to him.  Their horns sound so naked, so blunt, you felt almost guilty listening to it, like you eavesdropping.

Edugyan writes like she knows all about it, like she was there.  Sid’s story is haunting and memorable, and carrying guilt around with you is something most of us can relate to.  Here are a few more good lines from Sid:

To me, chocolate was the soul reason we on this earth.

I ain’t never thought fear had a taste.  It does.  In that small darkness it was a thing filling my nostrils, thick as sand in my throat, and I near choked on it.

Ain’t no exaggeration to say I never got over it.  Sits like a burn in m mind, a darkness at the edge of my thoughts.  Every day of my life.

Half-Blood Blues is a contender for Canada Reads 2014.  This year they are asking the question;  which book is the one that has the potential to change our nation?  In an interview Esi Edugyan and Donovan Bailey had with CBC, she describes her book as being about identity and belonging.  “These questions of identity and citizenship and belonging are very central to our national dialogue today.”  Bailey thinks that what Edugyan is doing in her book is “bringing the world back to Canada and showing how we see ourselves”.  I can see why this book won so many awards, but I don’t think their case is strong enough to be the winner for Canada Reads.  My hopes are for Annabel or The Orenda.