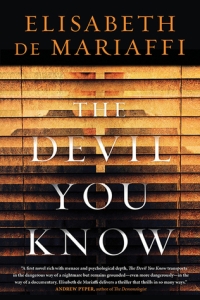 I went into The Devil You Know hoping to be scared silly, but that’s not what happened. It’s more a smart look into the way we have been taught to fear life. It is creepy and horrifying (it’s about rape and murder, after all), and suspenseful at times, but don’t expect it to make you jump until you are about 85% of the way through. Which is okay, if that’s what you are expecting. I don’t read a lot of mysteries or thrillers, so I am not an authority on what they should or should not include.

The story tells about a young reporter, Evie, who has just been given the job of gathering up the statistics for the missing and murdered girls in Toronto starting in the year 1983. It is now 1993, the year Paul Bernardo was discovered to be the Scarborough rapist and the murderer of several girls in the area (along with his wife, Karla Homolka).

As her research and the investigation into Bernardo is going on, Evie is dealing with her own demons from the past. At the age of 11, her best friend went missing and was found murdered, but her killer was never caught. Evie finds herself digging deeper into her friend’s case, determined to find out what really happened; why the man got away and where he is now. At the same time, she feels like she is being followed and has seen a man looking in her window at night. As Evie gets in over her head, the creep factor picks up, and we start to fear for her safety (as well as her mental state), but she can’t let it go.

I found the relationship between Evie and her mother interesting. Her mother’s past is shady and she is extremely reluctant to talk about it with Evie, once Evie begins to question her about it. I feel as if her mother had the power to prevent Evie’s dangerous ‘activities’, if only she had known how far her daughter was willing to go. Has anyone else read this? What did you think about Evie’s mother’s role in the book?

Although it wasn’t the thrill ride I was expecting, The Devil You Know is an interesting look at Toronto around the time of Bernardo, and into the very real fears of all of us walking around every day (and night), or even just hearing the creaks of our house or thinking that we have just seen someone in the window. Those things are truly the stuff of nightmares.

1. When you were a teen and you went out to babysit, who was it that usually drove you home?

The fathers always drove you home and they were the ones you knew the least. The whole world tells you to never get into a stranger’s car – unless you’re babysitting his ten-year-old.

If I ever have kids, I’ll tell my husband just to shut the f*ck up in the car with the babysitter: she’s probably afraid of him.

2. Why do we read true crime novels/psychological thrillers, etc.?

You know why women read that stuff… It’s so we learn how to get away.

3. How do we feel when we go for a walk at night? How must the girls of Scarborough have felt in the time of the Scarborough rapist?

You think about how scared you can make yourself at night on a dark, lonely street. Those girls stepped down off the bus and walked home listening for every little sound behind them. There’s a way of listening in the dark that’s so intense for girls. You can feel the insides of your ears. He waited until the moment they thought they were home, safe. That takes a special kind of interest.

4. “It’s almost always someone you know.” Does this not just make it 10 times worse? Who can you trust?

5. “It can’t happen if you’ve imagined it enough.” How many of us have thought this?

6. Our imaginations run wild (especially after reading a spooky book).

I spent fifteen minutes alternately telling myself to grow the f*ck up and the other fifteen listening acutely for strange noises in the hall.

7. And, what about those parking garages?

A locked car in an empty parking garage feels like one of those shark cages that scuba diving explorers use so they can take pictures of the sharks and not get torn to pieces.

8. All the advice we are told to follow to keep ourselves safe (remember those self-defence classes?).

A woman is more likely to be attacked if she’s got her hair in a ponytail; less likely if she’s carrying an umbrella.

If you think someone’s following you, make sure to never be alone, even in a crowd. Draw attention to yourself.

Here is a good review of the book, although I wouldn’t say the reader is “awash” in the rape hysteria; more like given a glimpse into it/a feeling for it. A few quotes from the review, because Stacey May Fowles puts it so well:

Yet what sets this novel apart is de Mariaffi’s masterful ability to evoke the feeling of the Bernardo era and what it has subsequently wrought. The reader is awash in the rape hysteria that gripped early-nineties Toronto and terrorized an entire generation of women, each still looking over her shoulder in the near-constant anticipation of becoming someone’s next victim. It examines how sex became synonymous with danger for these post-AIDS-crisis girls, raised on fear instead of pleasure, and taught to be wary of a villain no one could protect them from. They unceremoniously dispose of their virginity before it is stolen from them, make glib jokes about their own violation, and view their anxiety as a gift to keep them safe from monsters.

De Mariaffi keenly captures exactly how violence shifts the emotional landscape of a community, and Evie becomes a stand-in for every woman who has felt that pervasive threat of rape and been told she’s overreacting. She navigates the world with a disturbing yet familiar mantra; “Who? What? Safe?” Everything is analyzed as potential peril – scanning bars for the man who sits darkly in a corner, turning completely around while walking home at night, double-checking locks or sleeping with a knife under the pillow.

Checking the locks and sleeping with a knife under your pillow may be no way to live, but this novel serves as a vital accusation. This is the way you have taught us to live, it says.

12 thoughts on “The Devil You Know by Elisabeth de Mariaffi”