Just Beneath My Skin recently won the Thomas Raddall Atlantic Fiction Award. The competitors for the award this year were Sweetland by Michael Crummey and Crimes Against My Brother by David Adams Richards. I haven’t read Crimes Against My Brother, but Sweetland was one of my favourite books last year. I had to know what kind of book could beat out such strong competition.

Just Beneath My Skin was good. But, I still prefer Sweetland.

Why I prefer Sweetland:

1. Just Beneath My Skin is a short book, which is okay, but just when I was getting into it, it was over.

2. It would be hard to come up with a character I liked as much as Moses Sweetland.

3. Sweetland made me smile and laugh at times. Just Beneath My Skin is good, but it didn’t touch me in the same way.

What I liked about Just Beneath My Skin:

1. The story. After getting away for a while, Jake has come back to small town North River to claim his 8-year-old son, Nathan, but the sketchy characters from his past don’t want to let him forget who he is and where he came from.

Sometimes that’s the way I felt in North River. Like we were all living the same lives over and over again, with no way out, with no one to write us.

2. The characters. I found the characters compelling and believable. Nathan, in particular, is believable as a young boy who is confused about the behaviour of the adults around him, but finds ways of blending in and trying to anticipate their moods and actions ahead of time. Besides Jake and Nathan, there’s Nathan’s lonely alcoholic mother, Jake’s religious and well-meaning father, and Jake’s old buddies, Johnny and Charlie. If there was one character who was hard to wrap my head around it was Johnny Lang, intent on keeping Jake from getting ahead in life. But that is probably just because I (fortunately) have never known anyone like Johnny.

The thing with Johnny is you are either a friend or an enemy: there is no in-between… Being either is dangerous.

3. The writing and structure of the novel. The book is made up of short chapters, alternating between the perspectives of Jake and Nathan. This makes for a quick, intense read. The tension really builds at the end, as Jake and Nathan are both headed for danger; two very different kinds; and you are hoping both are going to make it through unscathed and unharmed and finally together.

Nathan’s staring up at me, trusting me, counting on me. I feel scared then, more scared then when I thought Johnny was gonna kill me in the swamp. I turn out the light quick and leave the room, because I can’t take him looking at me like that anymore.

I feel like I am giving Just Beneath My Skin an unfair review, because I am comparing it to Sweetland. (Sorry, Darren Greer!) The fact is, this is a good book, and I can see why it won the award. It says a lot about the challenges of growing up in a small town and getting in with the wrong crowd. It also explores the intricacies between three generations of fathers and sons who show their love in ways that are not always obvious. It is bleak, but strangely hopeful.

Just Beneath My Skin is the third book I have read since starting this blog that has either taken place in Nova Scotia or has been based on events that took place in Nova Scotia; the other two being When The Saints by Sarah Mian and Our Daily Bread by Lauren B. Davis. If a person were to read these 3 books in a row, they might get the idea that Nova Scotia is a dismal and backwards place to live, full of addicts, abusers, and murderers. This is not true – some of us are nice, and like to read. And the scenery is nice, too. I promise.

Here is a paragraph from the book that I love – it feels familiar to me:

I remember summers, full of fresh green grass and baseball and the smell of pine needles and cool river water and June bugs and badminton rackets and BB guns and the sweat of horses and fire in the fields in July and sparklers and moons and stars and indigo skies and blueberries and trout and lowing cattle and Ferris wheels and bare feet and inner tubes and swimming lessons and half-smoked cigarettes and fire hall junior dances and The Eagles and my first pint of lemon gin and corn roasts and the smell of insect repellent and hammocks and buttercups and stink bugs and swallows lined up on the telephone wires that scatter with one well-aimed rock and Popsicles and Moon Rocks and sleepovers and tents and nighthawks and the sweet smell of fresh-cut hay.

A review at the Quill & Quire that says everything I wanted to say, except better.

Visit Darren Greer’s blog to find out more about him and his other books, including Still Life With June and Tyler’s Cape. I will definitely be reading more from this author in the future.

21 thoughts on “Just Beneath My Skin by Darren Greer” 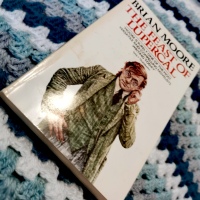