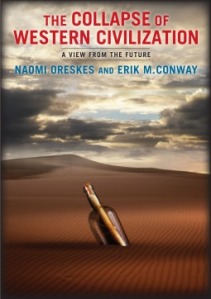 The title of this book is a mouthful for such a slim volume. But the message is huge. Anyone concerned about the state of our world, or, especially anyone who isn’t, should read this book. It won’t take long.

This novella can most effectively be summed up using passages plucked from its pages:

Here, our future historian, living in the Second People’s Republic of China, recounts the events of the Period of the Penumbra (1988-2093) that led to the Great Collapse and Mass Migration (2073-2093).

… the most startling aspect to this story is just how much these people knew, and how unable they were to act upon what they knew. Knowledge did not translate into power.

At the very time that the urgent need for an energy transition became palpable, world production of greenhouse gasses increased. This fact is so hard to understand that it calls for a closer look at what we know about this crucial juncture.

Leading up to the Great Collapse

Then legislation was passed (particularly in the United States) that placed limits on what scientists could study and how they could study it, beginning with the notorious House Bill 819, better known as the “Sea Level Rise Denial Bill”…

The thesis of this analysis is that Western Civilization became trapped in the grip of two inhibiting ideologies: positivism and market fundamentalism.

A key attribute of the period is that power did not reside in the hands of those who understood the climate system, but rather in political, economic and technological policies that drove the continued use of fossil fuels. 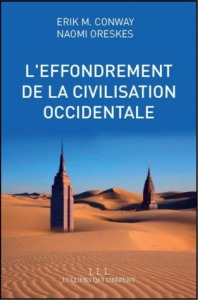 These quotes offer short snippets of the topics covered in the book. The authors go on to explain each conundrum and how it had a hand in the Great Collapse. It was both interesting and terrifying to read about the results of sea levels rising, temperatures increasing, prolonged crop failures, expanding deserts, mass extinction and migration, capitalism, governments panicking and breaking down. Possibly more terrifying than a horror novel due to the fact that we are on this course as we speak.

Quite frankly, this book makes us look ridiculous. Because it really is ridiculous that we know what’s going on but we are still carrying on as usual. And yet this book offers us hope for the future; the book is written by someone in the future, after all. And their incredulity of our actions hints at a better way of life.

I have Valorie to thank for recommending this book to me. You can find her thoughtful review and how the book came to be written here. Valorie also offers a more hopeful book, as an antidote to the doom and gloom of this one.

Here’s another one I think looks nice. Has anyone read it? 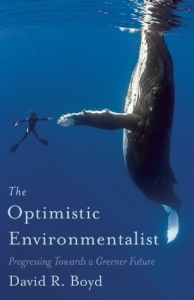 26 thoughts on “The Collapse of Western Civilization: A View From the Future by Naomi Oreskes and Erik M. Conway”