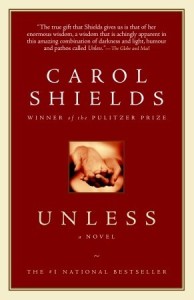 I haven’t read one of Carol Shields’ novels in such a long time that it was an obvious choice for the letter ‘S’ in my A-Z CanLit Project. But, which one? There are so many good ones to pick from. In the end, I went with Unless because of the premise: Reta Winters, 44-year-old successful author of light summertime fiction, has always considered herself happy, even blessed. That is, until her oldest daughter Norah mysteriously drops out of college to become a panhandler on a Toronto street corner — silent, with a sign around her neck bearing the word “Goodness.” [from Goodreads]

It was a good choice for me; I found so many of Reta’s thoughts familiar (even ones I didn’t know I had until I read them). It was comforting to see them so well articulated on the page. Reading this book felt like talking to a friend.

All my life I’ve heard people speak about finding themselves in acute pain, bankrupt in spirit and body, but I’ve never understood what they meant. To lose. To have lost. I believed these visitations of darkness lasted only a few minutes or hours and that these saddened people, in between bouts, were occupied, as we all were, with the useful monotony of happiness. But happiness is not what I thought. Happiness is the lucky pane of glass you carry in your head. It takes all your cunning just to hang on to it, and once it’s smashed you have to move into a different sort of life.

Reta is “not interested, the way some people are, in being sad”. But the disturbing actions of her daughter are taking a toll on her. She distracts herself the best she can with her daily activities; she continues to clean her house, visit her friends, and work on her novel. Life goes on around her; Bush becomes President, Chretien is Prime Minister, Margaret Atwood wins the Man Booker Prize. But Norah is constantly in her thoughts, and she tries to work out what has gotten her to this place; she feels it was most assuredly something she did wrong as a mother. Reta researches the meaning of ‘goodness’ trying to figure out how to save her daughter. All the things that could be wrong with Norah march through her mind. This ‘fight’ to get Norah back leads her to ruminate about the state of the world in general, and the power of women in the world, in particular.

Unless is the worry word of the English language. It flies like a moth around the ear, you hardly hear it, and yet everything depends on its breathy presence… Unless you’re lucky, unless you’re healthy, fertile, unless you’re loved and fed, unless you’re clear about your sexual direction, unless you’re offered what others are offered, you go down to the darkness, down to despair. Unless provides you with a trap door, a tunnel into the light, the reverse side of not enough. Unless keeps you from drowning in the presiding arrangements… Unless is a miracle of language and perception… It makes us anxious, makes us cunning. Cunning like the wolves that crop up in the most thrilling fairy tales. But it gives us hope.

Happy marriages: For those of you who have, like me, noted the lack of happy marriages in novels, you’ll be interested to know that the couple in this book have a happy marriage. They choose to comfort and support each other through the trial of their daughter’s lifestyle choice, rather than let it come between them.

A few more passages that struck me:

The radio host in Baltimore asked me – he must have been desperate – what was the worst thing that had ever happened to me. That stopped me short. I couldn’t think of the worst thing. I told him that whatever it was, it hadn’t happened yet. I knew, though, at that moment, what the nature of the “worst thing” would be, that it would be socketed somehow into the lives of my children.

This matters, the remaking of an untenable world through the nib of a pen; it matters so much I can’t stop doing it.

Blurting is a form of bravery.

What Carol Shields book(s) have you read and loved? 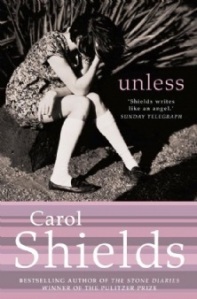 54 thoughts on “Unless by Carol Shields”