Let me start off by saying that I’m not generally a poetry person. But I have been learning to appreciate it more, as well as figuring out what kind of poetry works best for me (which I’m beginning to think is the secret). Last year, I read poetry by Rita Joe and George Elliott Clarke, and what I liked best was the history and the emotion behind it. This year, I’ve learned that I like poems that tell stories. 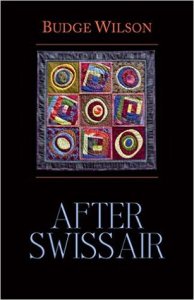 After Swissair by Budge Wilson

In After Swissair, Budge Wilson tells the story of Swissair Flight 111, which crashed into the waters near Peggy’s Cove, Nova Scotia on September 2, 1998, killing all 229 people on board. The poems in this volume come from many different perspectives of the event itself and the aftermath. It is still very much in the hearts and minds of the people living in the area, as well as the families whose loved ones were lost in the crash.

The poem, Peggy’s Cove, left a lasting image in my mind of loved ones throwing mementos into the sea; flowers, teddy bears, and even golf balls. On one particularly blustery day, when it was too dangerous to get close to the ocean, firefighters formed a human chain so that the mementos could still be passed along.

For over a week the families

they cling to the people who live there

tell them their stories

weep at their kitchen tables

they sit or stand on the rocks

arms around one another

some throw flowers into the sea

or teddy bears for the children

when passing the graveyard

I leave a ball in the grass beside his stone

others have come before me

to leave behind the same strange flower

There are poems from the perspective of the fishers, the RCMP, the divers, the women baking up a storm, the military, and even some of the monstrous machines used in the search efforts.

We could see it from the shore

One of the parts I found very moving was when the author of the book was finally able, once again, to look at the ocean and see its beauty.

The sea received them

as gently as it could

it did not kill them

(I grew up hearing the comforting sound of the foghorn, so I particularly like this passage.)

far off in the distance

the voice of a foghorn

always a sound full of questions

containing a sorrow and fear

but oddly a comfort

with a rise and fall

sorrow and fear and a comfort 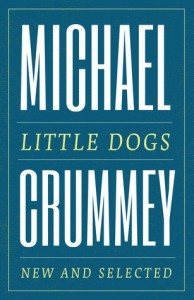 Anyone who has been following me for a while knows how much I love Michael Crummey’s novels. Now I can say I also love his poetry. Little Dogs is a collection of both his old and new poems, and many of them are like reading mini stories. In an interview with Carol Off on CBC Radio, the interviewer described them as being like short movies in your head. She had Crummey read out loud his short piece “Bread“, and I loved it so much I immediately went home and requested the book from the library. I strongly encourage you to listen to the interview just to hear that piece.

A lot of these poems are written about people and places Crummey has been hearing about his whole life; stories about his grandparents and their way of life. And some of them are more personal; ageing, memories of his parents, memories of childhood and adolescence, as well as life with his  family.

He writes about dogberries “looking festively persistent/beneath their crooked caps of snow.”

His poem about “manic chickadees” and their “needling racket” made me smile. He describes them as “an army of wind-up toys” whose “sole earthly purpose is reminding the unconscious world that morning’s not to be missed”.

I share with him a fond childhood memory of what we always called “the dump” – you just never knew what you were going to find there.

It was where ugly thrived.

prospered there in exile.

He writes about Elizabeth Bishop…

She grew up a curious creature,

writing as if she were certain

that something out there loves us all

And he writes about things more personal…

I came on in a few kitchens

where everything right went wrong –

it wasn’t love, it just kept me busy

until you came along.

I borrowed this collection from the library, but it’s definitely one I’d like to own.

I have only one poem to offer you this year. The other one I created was deleted from my camera, and it’s been too long to think of recreating it. But here’s the one my daughter helped me with when we were visiting my parents in March. It was my favourite, anyway.

a mountain of crumbs.

Do not say we have nothing.

How about you? Have you read any poetry this month? Or created any?