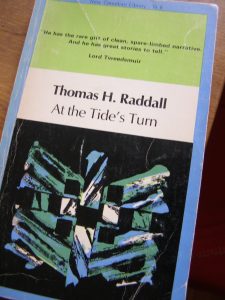 Those of you who have been following me for a while, know that I have a thing for Thomas Raddall’s books. I love that they tell a good story, while also teaching me something about the history of my home province, Nova Scotia. At the Tide’s Turn is the first book of his short stories that I have read, and with the exception of the first story (which was unfortunate, because it caused me to put the book down for a while before picking it back up again), I loved every one of them.

The first six stories in this volume are about the early days of “Oldport”, believed to be the Liverpool area where Raddall lived most of his life. The area was first settled by (other than the already present Mi’Kmaq community) New England Planters in 1759, which is the subject of the first story in the book. Subsequent stories continue to tell about the history of the area through to the year 1800. There was an influx of settlers to the area (the Loyalists) after the American Revolutionary War, and by the end of this series of stories, the American Revolution had been replaced by the Napoleonic Wars. Even in this small, isolated village on the coast of NS, we see the signs and effects of war. But the stories are not all politics and history lessons; they are about the people who live there, their daily lives, and the decisions that have to be made in order to ensure the survival of their precarious village.

In At the Tide’s Turn, Raddall tells of the conflict between Oldport and the city of Halifax. During the American Revolution, Oldport was seen to be sympathizers of the rebels and the Governor of Halifax kept a close watch on them.

For years they had watched with a shadowy disquiet the growing hostilities of the older colonies toward the mother country, but they had no suspicion of the tragedy in store for themselves.

In A Harp in the Willow, what the town “needed badly, though he did not say and probably did not know, was an infusion of new blood“. And just in time, three thousand Loyalists had landed looking for a place to settle. The challenge was that they had arrived in November and were in dire need of shelter and food.

War gathers men together and peace scatters them again.

In Between the Lines, it is 1800 and there are strict laws against helping deserters of His Majesty’s Army. But Flora is bold and determined to help the deserter she finds in the woods one day, sure to die of exposure if left on his own. By the time he is found, he and Flora have fallen in love, and Flora’s father, who is very fond of her, has to decide what to do with this wanted man.

It is a curious commentary on the life of a seafaring community of the time that nearly two hundred men and boys in Oldport could speak familiarly of Labrador, Madeira, New York, or “Curassow”, while those who have seen the first lake on the river, twenty miles upstream from the town, could be numbered on a pair of hands.

The last five stories in the collection are of a variety of other places and people, and as much as I was enjoying the Oldport stories, I think I liked these ones even more. 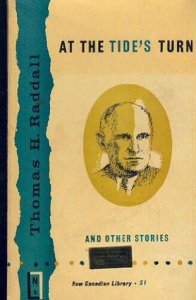 My favourite of them might be The Wedding Gift, the story of a young woman who is sent off to marry a man in the next village over who she really does not want to marry. She is sent to walk through the woods with the new young minister, who is just off the boat with no experience of Nova Scotia winters. Half way along a blizzard hits them, and they are lucky enough to find shelter in a hunting cabin. The woman takes advantage of the new minister’s inexperience, and conjures up a plan to free herself of her circumstances.

“Have you got the flint and steel?” she asked. She saw in his eyes something dazed and forlorn. He shook his head, and she was filled with a sudden anger, not so much at him as at Mr. Barclay and that – that Hathaway, and all the rest of menkind. They ruled the world and made such a sorry mess of it.

The Trumpeter and By Tellygraft are two stories about the legendary Duke of Kent; known by everyone by his temper and his mistress. The first is a cute story that displays the Duke’s sense of humour and generosity toward a young woman in the Valley who mistakes the Duke for the trumpeter and tells him her life story. as well as what she thinks of the Duke and his mistress. The second is about a woman who ‘hijacks’ one of the Duke’s new signalling stations to send a message to spare a man’s life. She did not do it for the man’s sake but to get back at the “hot-tempered Duke and his passion for discipline and the smart working of his telegraph.”

“Well, as I was saying,” Mr. Challoner went on, after a long pull at his port, “the Duke’s determined to extend his telegraph stations all along the road to Fort Anne. We shall see messages passed from Halifax to Annapolis in no more than an hour – two hours at most.”

“We live in an age of marvels, Madame, and stand upon the threshold of a new century. Who are you to say what is or is not to come?”

In the Introduction to At the Tide’s Turn, Allan Bevan describes Blind MacNair as “the story of the singing match that takes place in a blacksmith shop some place in Nova Scotia in 1872… gives us, as well as its wealth of ballad references, a brief glimpse of the American Civil War and its impact on Nova Scotians.”

“Many Nova Scotia men went to that war – ten thousand, they say – and some fought for the one side, some for the other, according to their opinions. There’s no knowing now which had the right of it, for a brave man makes a brave cause, and blood’s the one colour, North or South. But whichever jacket he wore, the Bluenose was an honest man and a fighting man and a credit to Nova Scotia.”

According to Wikipedia, “over 200 Nova Scotians have been identified as fighting in the American Civil War”, but that “the total probably reached into two thousand“. I was also interested to read that “one of the main reasons why Britain sanctioned the creation of Canada (1867) was to avoid another possible conflict with America and to leave the defence of Nova Scotia to a Canadian Government.”

Blind MacNair is also about the women who were so often left behind.

Too many women; for in those days men went out upon the broad world in the wind ships and the world did not always give them back. 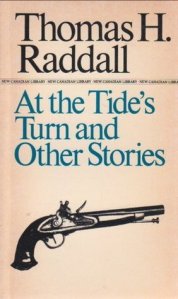 The last story in the book, Winter’s Tale, is about the Halifax Explosion told from the perspective of a teenage boy; a boy about the age Thomas Raddall would have been  himself at that time.

Then the sound was gone, as suddenly as it had come, and in its place there was a strange and awful hush that was emphasized, somehow, by strange and distant noises of falling plaster and tinkling glass. Grade nine was on its feet, staring at Old Gander through a fog of plaster dust, and Old Gander stared back at them, with his scanty grey hair all on end, and his long seamed face the colour of snow when rain is turning it to slush. A waft of cold air came in from the street, where the windows should have been, and the fog cleared before it. A girl broke the silence, screaming shrilly. James perceived that her cheek was laid open from ear to mouth, with a great red river pouring down her chin, and that others were putting fingers to cut faces and heads, and staring strangely at the stains. Grade nine was covered with plaster dust, and looked like a company of startled ghosts, and when James saw the thin red trickles running out of those white masks he knew he was dreaming, because things like that did not really happen. The girl with the red mask screamed again, and there was a chorus of screams, and then with one impulse the class turned and fled, as if it were Friday afternoon fire practice. James heard them clattering down the stairs into the street, with glass grinding and tinkling under their shoes. For a moment James was poised for similar flight, but in that moment he remembered the time he was frightened by a signboard groaning in the wind at night, and Dad’s deep steady voice saying, “Never run from anything, son, till you’ve had a good look at it. Most times it’s not worth running from.”

They sat, stiff and cramped, over the stove, and listened to the snow sweeping into the rooms upstairs, and the flap-flap of broken laths, and blinds blowing to rags in the empty window frames; and the night seemed to go on for ever, as though the world had come to a dark end and the sun would never come back again.

I loved these stories… maybe even as much as I loved The Nymph and the Lamp and Hangman’s Beach.

Do you have a favourite author who you suspect might not be quite as well loved by others as by yourself, and whose books seem to be rarely read no matter how much you go on about them?