I read about this book at Madame Bibi Lophile Recommends, and loved the sound of it. Just a man over the course of one day of his life, albeit an unusual day for him compared to all the others, brought about by the presence of a pigeon.

I was intrigued by this man and wanted to know what he was like. How does one live alone and follow the same routine for 30 years of one’s life and be content to do so?

Jonathan Noel lives a very structured life, with everything just so, and the same routine day after day. He lives in a one-room apartment in a building with a shared bathroom. He keeps to himself, going out of his way to avoid running into other tenants on the way to and from the bathroom. (And the reader will soon come to find out how dearly he prizes his privacy in regards to “nature’s necessity”.)

Jonathan had just got up. As he did every morning, he had put on his slippers and bathrobe so that he could visit the shared toilet before shaving. Prior to opening the door, he laid an ear to its panel and listened to hear if anyone was in the hall. He did not relish meeting his fellow tenants, particularly not in the morning in pajamas and bathrobe, and least of all on the way to the toilet. Finding the toilet occupied would have been unpleasant enough; but the idea of meeting another tenant at the door of the toilet was nothing short of a nightmare of embarrassment.

One day, on his way to work, a day in which he was already running a little behind, there was a pigeon sitting right outside his room. Just sitting there. Jonathan was paralyzed with fright over the pigeon, and before leaving for the day he packs a bag with everything he needs to stay at a hotel until the “affair with the pigeon” has been resolved.

… no human being can go on living in the same house with a pigeon, a pigeon is the epitome of chaos and anarchy, a pigeon that whizzes around unpredictably, that sets its claws in you, picks at your eyes, a pigeon that never stops soiling and spreading the filth and havoc of bacteria and meningitis virus, that doesn’t just stay alone, one pigeon lures other pigeons, that leads to sexual intercourse and they breed at a frantic pace, a host of pigeons will lay siege, you won’t be able to leave your room ever again… 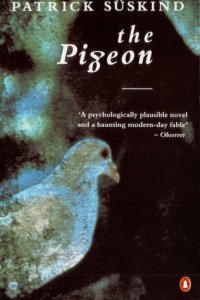 The “affair with the pigeon” throws him off for the rest of his day. He’s just not himself – the security of his world, his life, his room has been shaken. We follow him through the rest of this day, chuckling over several episodes that to him are truly horrifying (the ripped pants!). Listening to his inner thoughts, which at times are a bit alarming.

If he were not careful, especially in little things, and did not put all his energy into stemming the tide of such apparently trivial matters, like leaving his milk carton behind, then he would soon lose his grip entirely, and nothing would prevent his ending in misery.

I was greatly entertained by this story, speeding along to find out what would happen to this eccentric man – will he be able to pull himself together by the end of the day?

The End We Start From by Megan Hunter

Susan at A Life in Books is responsible for this one.

This novella couldn’t be more different from the last. There is one thing they have in common – the characters in both books are forced to leave their homes, albeit for very different reasons. In The End We Start From, the couple and their new baby evacuate their apartment because London is flooding, and they must find somewhere safe to go.

Obviously, the baby complicates matters, but it is the relationship between the mother and her baby that I liked best about this book. Despite the chaos and unpredictability of their surroundings, as well as losing her husband along the way, the mother does everything she can to make sure her baby feels safe and secure. I don’t know if it was the author’s intention or not, but this book really highlights the fact that a baby’s primary caregiver(s) is his/her whole world.

The story is written in poetic fragments, reminding me of Jenny Offill’s Dept. of Speculation –  but I like this one better. Here are a few lines/passages to whet your appetite…

It is bad, the news. Bad news as it always was, forever, but worse. More relevant. This is want you don’t want, we realize. What no one ever wanted: for the news to be relevant.

I try not to listen for the engine, for the way it will hum through me like a heartbeat, This means I listen constantly.

There are so many different kinds of quiet, and only one word for them. The quiet in the house has matured from quiet as lack of noise to something else, a textured, grainy quiet, a thickness to stumble through.

How quickly the everyday fills up time again. Glugs upwards from the earth, invisible until you’re splashing in it.

Have you been reading any novellas lately? Or books recommended by other readers? If you want some more suggestions for good novellas, head over to Madame Bibi’s blog – she’s been reading a “Novella a Day in May”.

38 thoughts on “Two Novellas: ‘The Pigeon’ by Patrick Süskind and ‘The End We Start From’ By Megan Hunter” 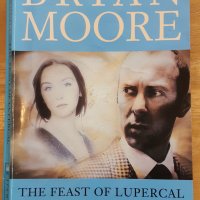