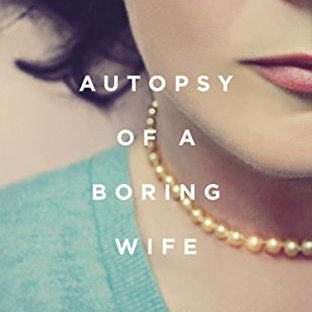 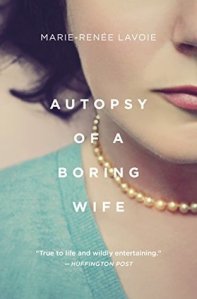 Autopsy of A Boring Wife, translated by Arielle Aaronson

I’ve always thought it terribly pretentious to gather all your loved ones in one place in order to say: the two of us, right here right now and in spite of the overwhelming statistics, declare that we, temporarily bonded by the illusion of eternity, we are FOREVER. And we’ve asked you to spend time and money to be here today because we – We – we shall elude whatever it is that dissolves other loves. Aged twenty-three, we are certain of this and want to share our conviction with you. We’re neither convinced or frightened that the vast majority have stumbled before the implausibility of this oath. Our love will endure because our love is special. Our love is not like other people’s. Our marriage will survive.

At 48, Diane is just a few years ahead of me; she has been married 25 years and both children have recently left the nest. But unfortunately for Diane (and hopefully this is where our lives take different courses), her husband has also left. For another woman. A younger one. Because he says Diane is boring. Boring! Can you feel the outrage?!

Diane is angry – very angry (which she takes out on her house and furniture with a sledgehammer). And in denial. And she doesn’t know what to do (which leads to her going along with some of her friend’s schemes to get her back on the horse). At first she’s like an ostrich, hiding out until the problem goes away (or corrects itself). But when that doesn’t work, she takes another approach. She creates her very first Facebook account, “friends” everyone she can think of, and announces that her husband has left her (like quickly tearing off a band-aid). Then she hides out again for a while – she doesn’t want other people’s pity.

I’m ashamed, which is weird… he’s the one who dumped me and I’m the one who’s ashamed. I feel like everyone’s looking at me like I have the plague.

Diane goes through her memories, looking for cracks, trying to understand. She loathes herself for being left behind, like there must be something wrong with her. She doesn’t even know if she loves him anymore, but being left behind is insulting and humiliating. And she longs to have him around, doesn’t know how to function on her own – it’s been so long. (Enter Steve, the three-legged cat.)

My loved ones, every single one of them, had left to make a new life. Without me. They were all building stories in places that didn’t involve me anymore. I felt lost, abandoned, like the wounded soldier you have to leave behind to save your own skin.

As Diane tries to figure out how to live her new normal, she keeps us laughing, even as we feel her pain. Diane may believe she is boring, but this book is anything but – it’s fresh, funny, and a lot of fun to read.

That’s the good thing about being boring: the most insignificant little thing becomes a gripping adventure.

(Even the chapter titles are entertaining, the first three being: “In which I give you my thoughts about marriage“, “In which I sink slowly, being dragged down by my own weight“, and “In which Claudine tries unsuccessfully to help me“.)

Nobody gets on a ship thinking it will sink. That said, ships do sink. The ocean floor is littered with wreckage slowly being consumed by sea flora and fauna. But with each passing day more ships, more majestic yachts, take to the sea. It’s understandable; the ocean is so beautiful. Love, like the sea, is so worth the risk.

Review at Pickle Me This: “Autopsy of a Boring Wife is slapstick, funny and absurd, but underlined with a tenderness and poignance that will have you rooting for ‘happily ever after’ after that.”

Montreal Review of Books: “The characters are vivid and entertaining, especially Diane and her reckless feistiness. Her emotional trajectory saves the novel from being just another post-break-up tragedy. The scenes and dialogue can be laugh-out-loud funny, and the narrative hums along smoothly, facilitated by the fine translation from French by Arielle Aaronson.”

Jael Richardson’s book pick on CBC’s “q”… Listen to what she has to say about the book (“honest”, “clever”, “unexpected” being a few of the words she uses), and how she feels it reflects on the breakdown of marriage being a different experience for men and for women.

Thank you to House of Anansi Press for sending me a copy of this book. (All quotations used in this review are from an uncorrected proof.) 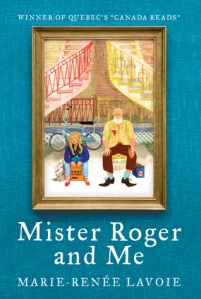 Mister Roger and Me, translated by Wayne Grady

After reading Autopsy of a Boring Wife, I was curious to know what else the author has done. I discovered that she has written this nice little book that was the winner of CBC Quebec’s Battle of the Books.

I was surprised how different this book was to Autopsy of a Boring Wife.

Mister Roger and Me is a coming-of-age story, narrated by Helen, a young girl/tween who is wise yet foolhardy. She takes risks, but also takes notice. She would rather be a boy and have lots of adventures, like Lady Oscar from her favourite cartoon, but instead has to content herself with a paper route. For now. (Having had a paper route when I was young, I could relate to her early mornings, and her loathing of collection day.)

The money she earns comes in handy – she uses it to help her parents. She worries about them more than a young girl should have to. (“I was cursed by a hyperawareness that robbed me of any healthy ability to take things lightly.”) Her father is unhappy at work and drinks too much at home. Her ultimate goal is to pay all the bills herself so her father won’t have to work anymore. But, in reality, all she can do is hide a bit of money in her mother’s purse to help buy the groceries.

All the world’s troubles crossed our doorstep every weekday evening, in the shadow my father dragged home with him. His wild eyes pinned his other, darker self to the ground, as if its furry contours would prevent his body from shattering to bits.

So who is Roger?

Roger is an older man – a neighbour – who sits out in his driveway everyday, drinking, swearing, making comments, and being generally contrary. He’s pretty much just biding his time until he dies, and doesn’t mind saying so.

And so Roger became an integral part of our daily routine, chanting his swear words, which got louder and louder and louder under the knife-edge gaze of my mother, about the vagaries of life, calling out “Hello, Sweetie” every time I left or returned to the house, loud enough to be heard by anyone within shouting distance. He was like an historical monument erected in front of a miserable palace, it was as though his body had taken route in our neighbours’ parking space. His face and his hands, perpetually exposed to sunlight, turned as read as maple leaves in autumn.

But as is often the case with a person so rough around the edges, Roger was soft and squishy in the middle. A near catastrophic event brings Helen and Roger closer together, and they form an unlikely friendship.

Helen finds out that life doesn’t happen the way you hope or expect it to. But that doesn’t mean it’s not worth living, and that there aren’t other joys to discover. Like taking pride in what you’ve learned and accomplished… as a worker, survivor, sister, daughter, and friend.

Roger had explained to me that the sisters [nuns] were all married to the same man and that they had to pray very hard so they wouldn’t die of boredom.

Whatever solidifies in one place crumbles somewhere else.

But it was easy for me not to be bad; I wasn’t unhappy.

Review at Buried in Print: “Befitting the tales of a young hero, whose attention is required in any number of places, and those of a traveller on a familiar route, much of Mister Roger and Me is episodic,… but Hélène’s determination is consistent and seductive.”

Montreal Review of Books: “Lavoie has beautifully captured those bright, shiny pre-teen years before the sordid side of human nature makes its unfortunate appearance. The use of Lady Oscar as a narrative device successfully brings the reader back to that tender age when performing an honourable deed was worth every last joule of energy.”

23 thoughts on “Marie-Renée Lavoie: ‘Autopsy of a Boring Wife’ and ‘Mister Roger and Me’” 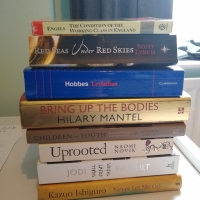 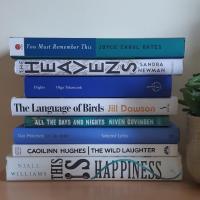 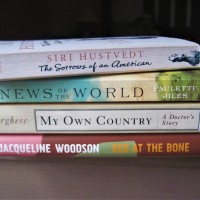