Elapultiek (We Are Looking Towards) by shalan joudry (Pottersfield Press, 2019)

Elapultiek is a play written by shalan joudry that was first produced by Two Planks and a Passion Theatre in Canning, Nova Scotia, Mi’kma’ki. Using her theatre background as well as her story-telling and ecology experience, joudry’s play is about two cultures learning how to work together for the good of the planet.

In addition to the script (which is excellent for most age groups, and perfect for school groups), the book includes: a translation list of Mi’kmaw words and phrases used in the script; information about the chimney swift, which is an endangered species in Nova Scotia; a short explanation about the idea of etuaptmuml (“two-eyed seeing”) in ecological research, brought forth by Elder Albert Marshall from Eskasoni as a way to “see the subject through both a mainstream ecological lens or eye as well as through a cultural Mi’kmaw lens for the benefit of all“; a page on the late Mi’kmaw Elder Lillian Marshall’s work to revive the story of Bear and the Seven Bird Hunters told in joudry’s play; and biographies of Melissa Sue Labrador, who created the art for the book cover, and shalan joudry, the author.

While visiting Mabel Murple’s Book Shoppe and Dreamery this summer, my daughters and I were browsing the poetry books, most of which are local and/or Canadian. This is one that was recommended to us by the wonderful Sheree Fitch (who has her own new book of poetry coming out this Fall). She was sold out of them at her shoppe, but the library pulled through for me like it so often does.

Writing as a modern Mi’kmaw woman, joudry’s poetry touches on contemporary issues – such as nature, culture, and healing – in the context of past, present, and future generations.

Each generation must make their own / journey through a thick terrain.

How ever we get lost along the way, let us / rejoice in the healing steps that follow.

I hope we all continue to gather at the edge / of the woods where the generations / before us and after us / re-merge. 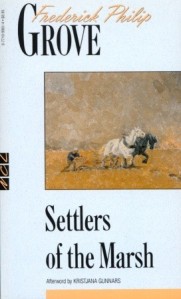 Settlers of the Marsh by Frederick Philip Grove (1925)

From a contemporary Indigenous play and poetry collection to a Canadian classic about a group of settlers in Manitoba.

Judging the book by its cover, I wasn’t sure how this book would go – but I own several of his books so wanted to give one a try. Settlers of the Marsh is Grove’s first book. It was met with controversy over its “obscene” and “indecent” content about a naive settler/farmer marrying a woman of questionable reputation.

This book turned out to be a page-turner for me – I felt so bad for this guy I needed to know how it would all turn out. On the surface, this is a grim story about an unfortunate settler who works hard and builds a profitable farm with the dream of sharing it with the right woman, only to have things turn out very differently. On another level, it’s a psychological study of the lives of settlers; their hopes and dreams as they live in relative isolation. As Kristjana Gunnars points out in the ‘Afterword’, “Family takes on great importance: to have a family means you have a community at home and people to talk to. Family may mean the difference between sanity and insanity, and ultimately life and death.”

Suddenly, as they were entering the bush, where the moonlight filtered down through the meshes of leafless boughs overhead, a vision took hold of Niels: of himself and a woman, sitting of a mid-winter night by the light of a lamp and in front of a fire, with the pitter-patter of children’s feet sounding down from above: the eternal vision that has moved the world and that was to direct his fate. He tried to see the face of the woman; but it entirely evaded him….

I was also interested in reading about the roles (and thoughts) of the women in the community; what was expected of them, what their experiences were, how they survived. Gunnars gives a hint as to how they were perceived: “Niels cannot understand either Ellen or Clara. Though they are vastly different women, they are equally strange to him. He is puzzled about their presumable idiosyncrasies: either they will not work like a man or they will not live like a woman.”

“Ellen, whatever you do, never let a man come near you. You are strong and big, thank God. Make your own life, Ellen, and let nobody make it for you!”

Molly’s father could very well have been teaching Settlers of the Marsh to his university literature students at the University of Alberta, in which case Molly’s name would have been Ellen or Clara. As it is, Molly is named after Moll Flanders – the book her father was teaching the day she was born.

Molly of the Mall is great fun. Especially if you love literary references in your reading. Jane Austen fans, in particular, will delight in Molly’s constant reading and referencing of Miss Austen. As she goes through her days – trying to be more like Elinor and less like Marianne – she wonders what Miss Austen (or her characters) might do or think or advise. (Other books and authors referenced include Roberts Burns, John Steinbeck, Virginia Woolf, Thomas Hardy, Emily Bronte, Daniel Defoe, George Eliot, Oscar Wilde, William Cowper… among others.)

Oh, Miss Austen, I come to you for answers, but so often you just give me more questions.

In my bedroom, Miss Austen’s books stared down at me, and I felt her judgment upon me. None of her heroines, even Emma, came close to being as nasty as I had been. And none would have eaten so much pudding. I felt them all turn their heads from me in shame.

… on most Burns Days, my family would play Burns-words Scrabble where words like “cleekit,” “swarf,” and “parritch” were all perfectly acceptable. I told him how my mother holds the family Scrabble record for getting “whaizle” on a Triple Word Score.

My long, now-soggy skirt was freezing to my legs, shortening each step. Meanwhile, my hair and scarf flapped about in opposite directions in an entirely unflattering way, my bruises and cuts stung in rhythm with every frozen step I took. My nose was running in ways too gross to describe. If Susanna Moodie had seen me, she would have included a chapter about me in “Roughing it in the Bush” as an exemplar of all that is horrifying and soul-destroying about Canadian winters.

Edmontonians will enjoy the book’s setting, from the West Edmonton Mall where Molly has a job selling shoes, to the university campus where she’s in her third year of an arts degree. (Also a very familiar time for any of us who attended university in 1995.)

… I had to come to terms with the fact that this Moll does not live in London, or Paris, nor does she perambulate within a picturesque landscape sodden with melancholic rain. Rather, this Moll lives in Edmonton where the men who love her are imaginary, fictional, or weird, the landscape is flat and snowy eight months of the year, and millinery is confined to the knitting of toques. 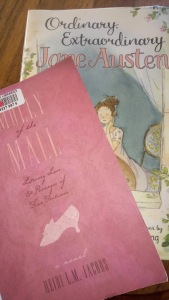 And how about some shoe shopping on Whyte Avenue?

Imagine a day where Miss Austen and I go shoe shopping and café hopping with Gerard Manley Hopkins, John Keats, or Mrs. Woolf. What fun! Or, Dante Gabriel Rossetti! I melt at the thought of sipping a cappuccino in a candlelit café with him, staring into his dreamy eyes and swooning at his Zeus-like hair, while he enumerates the ways in which my new Fluevog shoe are the apex of footwear artistry and the perfect match for my new vintage dress. But shoe shopping with Wordsworth? I’d have to spend the entire time talking him out of brown Hush Puppies with rounded toes and athletic shoelaces.

I’ve been wanting to read this gem of a book since it was a contender on Canada Reads in 2009. (And if you haven’t had a chance to check out Brian Francis’ blog, you don’t want to miss out – he’s got scrumptious recipes, cool crafts, and one-of-a-kind life-changing taste tests and experiments, like his Granny Candy Report!)

With Fruit, Brian Francis manages to write a book that is heartbreaking and funny at the same time. It’s not easy growing up at the best of times, and Peter Paddington, in 1984, doesn’t have it easy; he’s gay, overweight, and his nipples stick out like cherries. As he fantasizes about losing weight and making friends, he has to contend with bullies and, worst of all, tame his talking nipples.

It was hard to pay attention at school. I was afraid that someone might see my nipples poking out from under my sweatshirt. When my pencil tip broke during math class, I should’ve gone up to the pencil sharpener. But I just couldn’t. So I finished off my questions using the broken lead stub, which wasn’t easy, and my fingertips were all black by the time I finished.

“Face it,” my nipples said. “We’re going to be together for a long, long time. You might as well get used to us.” / I got out the masking tape and shut them up. I was so angry at my evil nipples. Who did they think they were, anyway?

Peter is not always fixated on his nipples. Like other teens his age, he has a variety of thoughts and imagined dialogues going through his mind.

My biggest problem is that I don’t know how to make boy friends. I never know what to say around other boys and I’m afraid that if I do say something, I’ll sound stupid. I guess I’ve always felt weird around other boys. It’s like all the other boys are normal except for me.

I’m United, which means I’m not very religious. United people aren’t afraid of God like Catholics and they don’t come knocking on your door like Jehovahs and you never see a United minister healing crippled people on TV. When I think of the United Church, I think of Goldilocks and the porridge that wasn’t too hot or too cold.

Now, Jane and I are best friends. Every night, I go downstairs and spend an hour with her. We stretch, we jog, we do sit-ups, and we firm up our buns. Every time that Jane says, “You can do it!” I know she’s talking directly to me.

I have never been a gay teenage boy, but Peter’s voice feels alive and authentic, and I was rooting for him all the way.

What have you been reading? 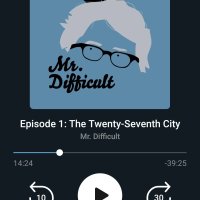 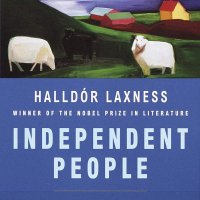