I had hoped the trunk would outlive me. That once I was gone, someone could dust it off, open the latches, and discover the treasures old Gran had hidden away. Without me to tell the story, no one would be able to figure it out. It would remain forgotten. Like the rest of us.

Every time I read one of Genevieve Graham’s books I think that maybe it’s my new favourite.

In the “Notes” at the end of the book, Genevieve Graham states that “starting in 1869, more than 120,000 destitute British children between the ages of three and eighteen were taken from England’s streets, orphanages, and homes, and then shipped across the ocean to work in other countries, where it was thought they’d have a chance to lead better lives. This went on for nearly eighty years, until 1948.” She goes on to say that, although the intention was to give them a better life, for many that’s not what happened; about three quarters of the children who came experienced abuse and neglect. And that “we now know that approximately 12 percent of Canada’s population–more than four million Canadians–are descended from British Home Children.”

In her novel, Graham chooses to tell both sides of the story, following a group of friends from the streets of England to the fields and farms of Canada. The story sweeps along swiftly, at times telling harsh truths that are hard to read about, and other times showing the strong bond between the children. While always tugging at your heartstrings. A few tears may have been shed during the reading of this book.

Reviews of her other books: Tides of Honour, Come From Away, and Promises to Keep.

I have also read At the Mountain’s Edge, which I also recommend to fans of Genevieve Graham and of stories about the Klondike.

I think I got this recommendation from one of those pandemic reading lists that were going around. (Maybe this one?) I prefer my apocalyptic novels to be realistic – a world that could conceivably happen. Not only is Severance an apocalyptic novel that seems terrifyingly possible, but it’s also thoughtful, well-written, and told through the lens of a first generation immigrant who has lost both of her parents.

The story alternates between before and after, highlighting the stark contrast between them. Especially since, once the fever arrived, it swept through the population very quickly. The narrator appears to be immune and soon meets up with a small group of other survivors who are making their way to “The Facility”, looting houses along the way for both essentials and luxuries. Sometimes the owners of these houses are still alive, sometimes they’re not.

There gets to be a cult-ish feel to this group, which adds another layer of distress for the character (and interest for the reader).

Have you been reading any pandemic books these days? Or are you doing your best to avoid them? 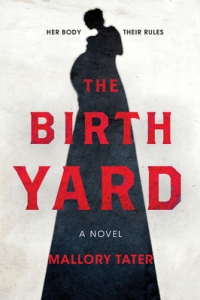 The Birth Yard by Mallory Tater

I have seen this book compared to The Handmaid’s Tale, and I suspect it could be compared to other books that explore misogynistic societies. These stories are always going to be universally popular, as they reflect ideas and actions we see in our world every day.

The “Den” is an isolated community apart from the “Main Stream” of society. It was started by a man in the 1960s who thought society would benefit from men and women sticking to more “traditional” roles.

He said that a woman’s hips hold power and menace. He believed that women were unable to control their power and limit their roles, and it was the principal danger that would soon lead to the downfall of Men.

The women are very much controlled by the men and by the drugs given to them at each stage of life. For example, at the age of thirteen girls are given DiLexa to control and synchronize their menstrual cycles.

We are too hysterical to be trusted. We need Men to help us tend to our bodies.

Women are really only valuable because of their ability to have babies. Once pregnant, the women go to the birth yard until their babies are born. We are told about the history and rules of The Den through Sable, an eighteen-year-old who is to be matched and impregnated; and, more importantly to the reader, who doubts and questions the world she lives in.

The Birth Yard is a page-turner that reminded me more of The Giver and The Hunger Games than The Handmaid’s Tale.

For me, this book was pure escapism. As a fan of Jane Austen, I enjoyed all the references to her work as well as echoes of her storylines and characters in these pages.

The more he learned about Austen from Mimi, the more he was impressed by how she mostly wrote about bad behaviour.

With a motley crew of characters brought together by their shared love of reading (specifically, reading Jane Austen), it reminded me of The Guernsey Literary and Potato Peel Pie Society. It takes place in Chawton after the second world war as people are putting their lives back together. Some are finding it harder than others. All the characters in the Jane Austen Society are grieving in some way and find solace and friendship with one another. A real heart-warmer.

Bookended by the two worst wars the world had ever seen, they were ironically the survivors, yet it was beyond him what they were all surviving for.

From Natalie Jenner’s website, I found this video of Jenner explaining how she came to write her book. I found this enhanced my enjoyment of the book even more – definitely worth watching!

I’ve been on the streets of England, Ontario farms, post-apocalyptic US, a misogynistic cult, and the sleepy town of Chawton.  Where have your library books taken you lately?

20 thoughts on “From the Library: Home Children, A Pandemic, A Cult, and Jane Austen”