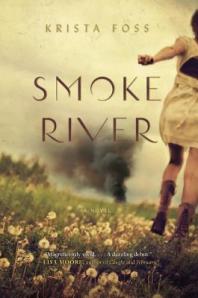 I’ve been thinking for a while about what to say about this book. I could do a bunch of research and go into the history and politics of First Nations land disputes and Treaty Rights in Canada. I could give you my opinion about how all the issues should be solved. But, I think I will just let the book speak for itself, because, regardless of history and people’s thoughts on the subject, land disputes don’t seem to be going away, which tells me that no one seems to be coming up with any kind of solution that satisfies everyone. This is the very reason why I think Smoke River is an important book to read. It brings awareness to issues that most people would like to just sweep under the rug.

Smoke River is filled with interesting characters. Getting to know them all makes for a slow start to the book, but hang in there. Soon you will be pulled into the small town drama and racial tension that permeates this book.

As you have probably already guessed, this story centers around a land dispute between the ‘Townies’ and the ‘Natives’. As Wayne Grady puts so well in his endorsement for the book, “… Krista Foss shows how a blockade raised by First Nations women against a development on Mohawk land can be a metaphor for the barriers that separate us all – Native from white, husband from wife, mother from son – on both sides of the divide”.

This is an important and well-written book. It brings to the forefront issues that First Nations people have to contend with every day. Krista Foss takes what we see in the news headlines and humanizes it, delving into the lives of the people who are most affected by the events. Using her characters’ voices, she allows us to see all sides and perspectives in a natural and insightful way.

I would recommend this book to anyone who is interested in a look at the relationship Canada has with the First Nations community. But, the story is much broader than that. It is about relationships within families; how tension can sever bonds and cause us to act uncharacteristically; it is about justice and pride; and it is about how land connects us all to our people and to our past. And, hopefully, reading this book will help us all to walk for a while in someone else’s shoes. That can only be a good thing.

Her people called the place simply o’ta:ra, their word for clay as well as clan, for everything that was land and family and how who you were and where you lived were indivisible.

… not everything of the past can be swept away, … choice and intention are palpable forces of resistance.

Never let a fire go out if you expect to be warm another time.

First missionaries and churches, then residential schools. And now legislation that defines a race by giving it no definition worth having. Hand out the funds and rights. Water down the cultural and blood ties. Keep everybody just poor enough. It’s the politest genocide on the planet.

With all due respect, I must remind you that your ancestors borrowed our version of democracy and then abandoned it for something less democratic. Then you told us we must practise your democracy. At the end of a gun.

… we’re not a culture, as you government people like to say. We’re a civilization. We have our own way of governing. We have our own civic codes, institutions. You just keep trying to take them away from us.

This conflict will not be won with public relations. it will be won with history, the history everybody forgets.

… what you choose to notice, and what you don’t, shapes your understanding, and so your life.

If you want to learn more, this article about treaty obligations in the Literary Review of Canada, coincidentally, just arrived in my e-mail.