I put in a request for this book as soon as it made the Top 5 cut for the 2015 Canada Reads debate. It finally arrived, too late for the debates, but never too late for driving home its urgent message.

By now, most of you have probably heard of this book, or have already read it. It won the Governor General’s Award for Children’s Literature, then swiftly got caught up in a controversy over its appropriateness for this award. It is jam-packed full of graphic sex and references to sex, gay and straight, there is non-stop use of mind-altering substances, and sickening instances of bullying. To make it even more upsetting, these kids are only in grade 8. Like my daughter. Devastating is the word for this book, right down to very last page. But, don’t let this stop you from reading it. Let it make you uncomfortable, look past the surface of this story, and see the children who are aching to be loved and valued for who they are.

I used to wonder if the parents who looked at me and my yellow blanket in the nursery with all the other babies that I was a little boy or girl. If it mattered. If, on my first day on earth, I wasn’t either.     I was just beautiful.

Jude longs to be a movie star, and he is not afraid to show it. He wears his mother’s clothes and make-up, and the kids at school call him Judy. He imagines that his bullies are his fans and school is the studio. This is how he survives his day-to-day life as a gay boy in a small town. In fact, I believe that if it weren’t for his imagination and his dreams he would never have made it as far as he did.

I wanted them to hate me; hate was as close to love as I thought I’d ever be.

Imagine what Jude’s life might have been like if he had felt loved and accepted for who he was. He could have had a chance – at least as much of a chance as the rest of us. That’s all he’s asking for.

I loved lies because, when you’re a lie, you’re anything, you’re everything.

Sometimes you just have to keep fooling yourself or you’ll never survive.

Should children (14+) be reading this?

Some people are questioning whether or not our children should be reading this book. Maybe they’re worried Jude and Amanda’s behavior will rub off on them. I don’t know who would read this and think to themselves that the characters in the book have enviable lives. Instead, I believe it will evoke compassion and a better understanding of what kids like Jude go through everyday. Hopefully, our kids will grow up to be more accepting of differences than our generations have proven to be. And, books like this are part of the solution, not part of the problem.

I always hoped that if I could give Keefer another world he could escape to (books and stories), he might survive this one.

This story was inspired by true events, specifically the shooting of Larry Fobes King when he asked someone to be his Valentine. Unfortunately, we will never know what Jude and others like him could have offered the world, because their lives have been cut short by people who felt threatened by their differences.

I do not pretend to have the answers, but reading is always a good place to start. Reading this book, for me, was a good way to start a conversation with my children. My 10-year-old daughter was drawn to the cover of the book and wanted to know what it was about. So, we talked about the book (obviously, not all the gory details) and the message that the writer is trying to get across. This is not be the one and only conversation we have had on this topic, but it gave us the opportunity to revisit it and to dig a little deeper.

I think this would make a great book club choice. I came out of it with a few questions and comments that I would love to hear other people’s opinions on.

~ I would love to talk about Angela – her character frightened me, for one thing, but I also couldn’t quite figure her real self out. I want to know what’s causing her to fall apart at such a young age.

~ I went into this book expecting the very worst after everything I had heard about it. Jude’s home life was not good, but I think it could have been worse. There were a few people in his life that cared about him. I guess this isn’t always enough. Or maybe it was at least enough to keep him dreaming about a better life?

~ What is it that makes Jude so much stronger than Luke? Jude handles being bullied his whole life, but Luke can’t take it for more than a few days. Maybe Jude has built up a tolerance for it because it is all he has ever known?

~ One thing I couldn’t put my finger on, but was enlightened after reading Casey’s review of the book, was that Reid did not make Jude out to be a typical victim. This story is not black and white. Jude is not meek and blameless. Luke is not pure evil.

~ What do you think of Mr. Dawson? I couldn’t quite figure him out. Also his statement to Jude that “it’s better to be hated for who you are than loved for who you’re not”. Do you think that’s always true?

One thing is sure, Raziel Reid knows what he’s doing.

For a couple of emotional, gut-wrenching reviews of this book, read Eva’s and Rick’s. After reading their reviews, I thought I might just skip one and refer you to theirs, but then I managed to find some things of my own to say, after all. I love this line from Eva’s review: His little brother always saw Jude the way that Jude wanted everyone to see him – as fabulous. And, this one from Rick’s: This story is filled with violence and intolerance and exclusion, but if you think this is a novel about hate then you’ve entirely missed the point. I have tears in my eyes from re-reading their reviews. Go read them!

On Raziel Reid, and when everything feels like a controversy at the National Post talks about the controversy surrounding this book, and how ridiculous it is (my words).

Raziel Reid talks about his book, the inspiration behind it, and what it means to him.

When Everything Feels Like the Movies was part of the Canada Reads debates this year, and the book was the runner up. Lainey Lui had some passionate things to say about it. 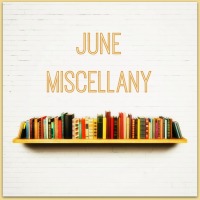