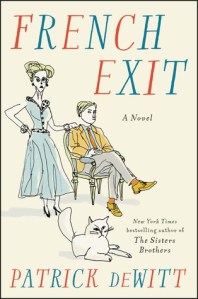 Frances and Malcolm, mother and son, a wealthy pair of callous social outcasts, have just found out that all their money is gone. They have to make big changes, but neither are inclined to work for it – what will become of them? (“… her blood thrilled at life’s gruesome pageant.“)

Frances’s friend, Joan, offers the use of her apartment in Paris. How Frances even has such a friend, I’m not sure. Frances is not a nice person. And her son, Malcolm (that “lugubrious toddler of a man“), is lacking personality and gumption. Incredibly, he has a girlfriend. (“He was a pile of American garbage and she feared she would love him forever.”)

Frances and Malcolm are not even nice to each other, although they are unusually attached.

And let’s not forget about Small Frank, the cat who follows them all the way to Paris, and who Frances believes to house the spirit of her dead husband.

On their cruise to France, and after they have settled into the apartment, Frances and Malcolm become acquainted with an odd collection of people, who have come together as a result of Small Frank’s disappearance (but maybe more as an excuse to drink gin and wine?), including a clairvoyant (who Malcolm has known “carnally”), a private detective, a doctor, the wine man, Malcolm’s ex and her new fiancé (don’t even ask), and a lonely widow who has made herself quite at home in their apartment. Luckily for everyone there, she can cook. “Mme Reynard prepared and distributed drinks. She had, since moving in, and in an effort to create a demand for her presence, purchased a cocktail recipe book.”

It’s hard to talk about this book without using words like ridiculous, ludicrous, absurd, preposterous, and strange. But it’s also smart, entertaining and funny. So many kinds of funny; funny strange, funny funny, stupid funny, crazy funny, that-could-never-happen funny, darkly funny, and snort-your-drink-out-your-nose funny. You are likely not surprised to hear that I enjoyed (most of) it immensely. But I’m not sure that every reader will appreciate deWitt’s sense of humour.

The parts that were not as ‘enjoyable’ were learning about the childhoods of Frances and Malcolm. But this serves to help us understand them better. Is it possible that the reader might even start feeling a little bit sorry for them? Could we go so far as to like them? That might be a stretch for this reader. But read it and see for yourself.

Frances had prepared herself to face off against a roomful of impeccably dressed French women of high social standing. It was to be a night of implied insults and needling insinuations and she could hardly wait to get started.

Kim at Reading Matters: “It’s quite a voyeurestic read. Frances is a brilliant creation: a badly behaved woman who is an expert at droll putdowns, an eccentric sociopath who takes no responsibility for her poor decision making and feels hard done by without reason. I loved spending time in her company.”

Marcie at Buried in Print: “Ludicrous and lugubrious, sorrow-soaked and snort-worthy: Patrick deWitt’s novel packs a wallop. You might bite your lip to hold in your laughter, but then consider chewing through it, just to taste the blood, the life beneath the surface of it all.”

Other blogger reviews: A Life in Books, Annabookbel, Bookish Beck

Have a listen to Tania and Kirt talk about French Exit on their podcast at Write Reads.

The New Yorker: “DeWitt is a stealth absurdist, with a flair for dressing up rhyme as reason. His best dialogue is decorous, with a preposterous thrust.”

Quill & Quire: “While we are following the self-inflicted downfall of Frances and Malcolm and getting pulled into their relationships with the other characters, deWitt subtly yet explicitly jabs at us to pay attention to the grander themes of humility, generosity, and even finding one’s purpose in life. The fact that he does so while making us snort in amusement renders the experience that much more enriching.” 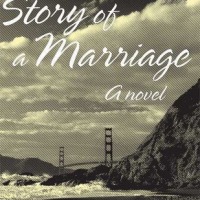