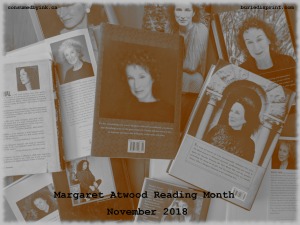 Thanks to everyone who participated in Margaret Atwood Reading Month and contributed their enthusiasm, interest and experience to making the event a success. We’ve collaborated on this link collection, so we’re cross-posting. Please let us know if we’ve missed anything and we will transform all the information into a page that we can update for future MARMs!

Straight away, after our announcements on October 1st, there was talk of plans and excitement. Bookish Beck made plans quickly. And Angélique chatted about just beginning her Atwood exploring (with The Heart Goes Last and Alias Grace).

Paula Bardell-Hedley reminded readers every week through October of the event and then crowned the promotion with her Margaret Atwood Shelfie and, later, some of her favourite covers.

Heaven Ali and Karen shared some of their favourite covers too.

And so did I, along with my favourite quotes (which Paula had fun with as well).

Madame Bibi titled her review post (see below) with one of her favourite quotes (you’ll have to click through to discover what it is) and Anne on the Shelf tweeted a timely quote for November as well.

Many readers shared their first experiences. Some, like A Life in Books and HeavenAli and Karen and Marcie, found it hard to pinpoint the specific book which twigged their interest in the late ‘80s. The classic Virago Modern green-spines or one of the chunky pocket books? Was it The Handmaid’s Tale, Surfacing, Lady Oracle, The Edible Woman, Bluebeard’s Egg, Cat’s Eye or Bodily Harm?

Others specifically recall their first Atwood. For Kat and Debbie it was The Edible Woman. For Rebecca and Lisa, it was The Blind Assassin. For Laila, Cathy, and for me it was The Robber Bride.

(The winner for Most Firsts appears below – there’s still time to guess! And there was one reader for each of the following as their “first”: Cat’s Eye, Oryx and Crake and Lady Oracle. Was it you? You’ll find those below too.)

Lady Oracle (1976)
This was Rickster Rick’s introduction to Atwood and a favourite of HeavenAli’s.

Life Before Man (1979, finalist for the Governor General’s Award)
Ali @ HeavenAli
(Marcie read this one too but left a comment on HeavenAli’s blog instead of posting something herself. Maybe she will still post it?? *nods head vigorously*)

The Handmaid’s Tale (1985, winner of the 1987 Arthur C. Clarke Award and 1985 Governor General’s Award, finalist for the 1986 Booker Prize)
Out of those who commented or posted, for the majority of Atwood readers this was their first of her books.
Including Anne, Paula, Kristie, Kristine, WhatMeRead, Vishy, and Lory.
For Rachel @ Hibernator’s Library too, who writes about it here and here.
And Iliana @ Bookgirl, and Reese @ ReeseReads (who made it fit with some challenges too).

Cat’s Eye (1988, finalist for the 1988 Governor General’s Award and the 1989 Booker Prize)
This was Priscilla’s introduction to Margaret Atwood. And Melanie had just announced she was going to read it in October when she saw the announcement about MARM.

The Robber Bride (1993, finalist for the 1994 Governor General’s Award and shortlisted for the James Tiptree, Jr. Award)
This was my first Atwood (and Cathy and Laila said that it was their first of her books too).

Alias Grace (1996, winner of the 1996 Giller Prize, finalist for the 1996 Booker Prize and the 1996 Governor General’s Award, shortlisted for the 1997 Orange Prize for Fiction)
Lisa @ ANZ LitLovers
Yasmine Rose @ Yasmine Rose Reads featured Alias Grace as a selection in her ongoing Sunday series in which she recommends a book “written by a woman who has influenced and shaped my intersectional feminist perspective, with special emphasis on women of colour, women in translation, LGBTQ+ women and women of different religions”

The Blind Assassin (2000, winner of the 2000 Booker Prize and finalist for the 2000 Governor General’s Award, shortlisted for the 2001 Orange Prize for Fiction.)
Yasmine Rose @ Yasmine Rose Reads

This is Marcie’s pick as her favourite Atwood (at least for this year!)

Oryx and Crake (2003, finalist for the 2003 Booker Prize and the 2003 Governor General’s Award and shortlisted for the 2004 Orange Prize for Fiction.)
This was Melanie’s introduction to Margaret Atwood.
And Carra read this and loved it so much that she ordered the rest of the books in the trilogy but she prefers to play in a corner by herself, so wave in her direction as she waits for her shipment. *smiles and waves*
Also, Yasmine Rose wrote about the trilogy as a whole (see below).

The Year of the Flood (2009, Oryx and Crake companion, longlisted for the 2011 International Dublin Literary Award)

But of course, Margaret Atwood writes a lot of different forms, so there was also more to say about her children’s books (from 1978’s Up in the Tree to 2011’s Wandering Wenda and Widow Wallop) here (by Thoughts Become Words) and here (by me). Kristie read some short stories. I peeked into her poetry and, would you believe, a cookbook?! And Marcie held a discussion about readings, interviews and TV adaptations.

Finally, because the event unfolds in November to celebrate her writing and her birthday, there was also cake, at Laila’s house and at mine too!

Now for those of you who missed their slice of cake on the 18th, you’re lucky that we tossed a few leftover slices into the freezer. Grab a plateful and start thinking about what Margaret Atwood book you might like to read next!

**(If we forgot anyone, or if anyone posts a little after-the-fact, please let us know and we will add you to the list!)**

In Case you Missed It:

November 1: Beginnings at Buried in Print and Consumed by Ink

November 15: Favourites at Buried in Print

November 22: Quotations at Consumed by Ink

November 29: Endings at Buried in Print

November 30: A Round-Up of links collected from participants at Buried in Print and Consumed by Ink

You can find more information about this event in our announcement post here and here.

See you next year!