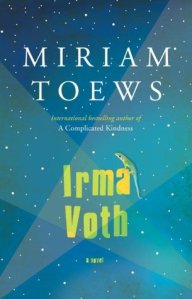 I have been stuck on the Letter I for a long time, so I am announcing my first cheat/bending of rules in my A-Z CanLit Challenge. Usually I go by the author’s last name, but this time I am going with the title. I just couldn’t get excited about the books I was finding under the letter I. I am sure they are good, and maybe I will re-visit them later, but for now I am not interested. And reading Irma Voth by Miriam Toews feels a lot more relevant to me right now, having just read All My Puny Sorrows. At the end of my review, I expressed interest in reading more of her books, so including her in my CanLit challenge just makes sense. Besides, it’s my challenge and I can cheat if I want to. But, let’s call it bending the rules a bit. So, Irma Voth it is.

Miriam Toews is a Canadian writer of Mennonite descent. She grew up in Steinbach, Manitoba and now lives in Winnipeg, Manitoba. She has done so much, but I am going to concentrate on her books:

Swing Low: A Life (2000) | Non-Fiction – winner of the Alexander Kennedy Isbister Award for Non-Fiction and the McNally Robinson Book of the Year Award

A Complicated Kindness (2004) – winner of the Governor General’s Award, the McNally Robinson Book of the Year Award, the Margaret Laurence Award for Fiction, and CBC Canada Reads 2006. Finalist for the Giller Prize and longlisted for the International IMPAC Dublin Literary Award.

The Flying Troutmans (2008) – winner of the Rogers Writers’ Trust Fiction Prize, and longlisted for the Orange Prize for Fiction

According to Wikipedia, Irma Voth was partly inspired by Miriam Toews’ experience as lead actress in the film, Silent Light (2007). Toews played the part of Esther, a conservative Mennonite wife. The film won several awards at the Cannes Film Festival, and Toews was nominated for best actress at Mexico’s Ariel Awards. I had never heard of this film before, but now I would like to see it.

9 thoughts on “Miriam Toews, Irma Voth, and My First Cheat”