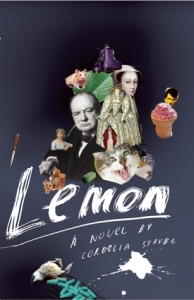 Even though Lemon (Limone) has three mothers, she feels like she has no one. This could have something to do with the fact that her adoptive mother is depressed and suicidal, her adoptive step-mother is out-of-order since getting attacked by a student at work, and her biological mother has only just decided to make herself known. As for Damian, her adoptive father, he keeps flitting from woman to woman. Not to mention his helpful comments… “If you wore some decent clothes you might even be pretty.”

The thing is, as the reader, and as an adult, we know that the grown-ups in her life aren’t as bad as she thinks they are. One in particular even seems to know what she’s doing. But that doesn’t stop Lemon from feeling alone in the world. And before things can get better, of course, they have to get worse.

When I was eight I decided to stop reacting to humans. Reacting gives them power, which they can use against you. Registering nothing shields you. The attackers throw jibes and punches but go unrewarded. You’re still inside your body feeling the pain, but the ass-faces can’t see it.

Lemon goes to a party with her friend, a friend she has known for a long time but who has recently morphed into someone she doesn’t recognize. “She looks in the mirror and frets about what guys will think of her. What she thinks of herself doesn’t matter anymore.” But she still cares about her and worries for her, so goes with her to the party. And this is where bad things happen (are kids in real life really this mean?!), things she keeps to herself, and on top of another sad event in her life, she is sent into a downward spiral of despair.

Which all sounds completely depressing, doesn’t it? But it’s not, really. Lemon’s voice and her thoughts are so interesting to listen to; she’s smart and she cares about stuff, even if she acts as though she doesn’t. She volunteers at the sick kids hospital and gets attached to the kids who need her most. She cares about her friends and the state of the world and even her mothers. And I think that it’s all this caring that wears her right out. She so desperately wants to belong, to have a home, to be loved.

You have to wonder if all children were loved, I mean really loved not just owned, controlled, spoiled and gloated over, we’d have a better world.

The fact that she loves to read will be attractive to other readers. She talks about the books she’s reading, and takes what she learns from them and applies it to the world she sees around her. (She almost ruins Jane Eyre for me.) She’s an observer, and comments on everything she sees going on around her. Through her eyes, we see how absurd and stupid humans can be. She also knows a lot of historical facts and keeps up with what’s going on in the world right now. She ‘collects’ morbid stories, ones that make her feel better about her own life, and rattles them off to people (who don’t appreciate it as much as I did).

… I just can’t see how it’s possible not to go nuts. That’s if you think about anything for more than five seconds. If you can stop thinking after five seconds and move on to some new topic, you’ll probably be alright.

One of these days the tech world’s going to short-circuit and we’ll be surrounded by computer geeks who won’t know how to grow food or make soap or talk to people.

… the perils of faking it. I mean, if you fake it long enough you must lose sight of the real thing. Faking gets you places but then you have to lie there with your legs over your head oohing and aahing for like, forever. Maybe you stop expecting to feel anything. Maybe it becomes normal to spend all your time making somebody else feel good.

Our classical literature is all about women who end up serving some schlep.

… I have to admit it’s alright having a man around. You breathe easier and don’t jump at every sound. Maybe women put up with crap from men because they want bodyguards.

What’s so great about control is what I’d like to know. Why can’t we LEAVE EACH OTHER ALONE?

I read this book around the time of the Women’s March, and as I was reading and despairing about violence against women, I was able to watch all those women marching together and all those amazing signs they carried. But, of all the signs I looked at, this is the one that stood out to me that day and gave me back some hope.

Lemon was longlisted for the 2010 Giller Prize, and nominated for both the 2010 Trillium Book Award and 2010 ReLit Award.

Lucky for me, Cordelia Strube has written quite a few books, her most recent being On the Shores of Darkness There is Light.

Kevin from Canada liked it: “The coming-of-age novel may be a bit of an acquired taste; if it is, you can count me in as an aficianado. I am grateful to the 2010 Real Giller Jury for including it on the longlist because I would have missed it otherwise (it has been out for a year); I would not have been critical of them if they had included it on the shortlist. I am sure that some of the incidents in Lemon will be popping into mind for some time to come.”

So did The Mookse and the Gripes: ” I think a lot of these types of books sound the same; I’m prejudiced because I think the voice of an angsty teen is easy to mimic, though rarely feels genuine. I was fully prepared to dislike this book. In fact, while reading it, I actually kept thinking that eventually it would fall apart in my hands, validating my preconceptions. But that never happened.”

40 thoughts on “Lemon by Cordelia Strube”